This was my official school photo from my first year at secondary school. As you can see, I was a fairly scruffy kid with no pretensions of diva - but the long eyelashes were probably a giveaway. I remember a classmate asking me if I dyed my hair, which probably sums up what I looked like back then: very dark hair and pale skin. 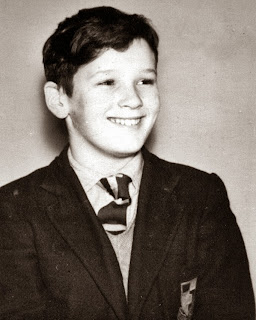 I suppose I knew from the age of about 3 that I was gay. I remember seeing a guy changing on the beach and I actually felt a rush of lust.

I'm the youngest of 4 kids, and learned early on that I was different and probably tried to hide my differences by becoming quiet and introverted.

I had very few friends, and those I did have were girls. Why didn't anyone put 2 + 2 together?!

Around the time of this photo, I discovered sex. I won't go into any lurid details, but needless to say at that age I was jailbait! I never got caught though. So, moving right along ...

My parents split up when I was 9, and I moved from Gloucester at 15 to live with my mother on the east coast of England. Then, I started pretending to be straight by having a girlfriend. We even got engaged to be married - but thank God I saw the light before that happened.

I moved to London at 21 and discovered a very healthy gay scene there.
I eventually moved to Madrid, Spain for love - which unfortunately didn't last, but living in Spain did. It was a good time to be in Spain: gay liberation was in the air, along with sexual liberation. I am now with my definitive version lover, and we are about to celebrate 10 happy years together.

My parents are both dead now and I never had the chance to tell my father who I am. But I did tell my mother, and she accepted it with her blessing. Me and my partner's familes all know about us, and we are just another couple within the family framework.

When you consider that in my youth homosexuality was illegal, it shows that self-acceptance and self-love is the key. Something inside me always told me that my feelings were natural and inborn. I really feel I have no regrets, and I'm now a well adjusted member of the human race.

And I'm as normal as the rest of us.