This is a picture of me and my two brothers. I'm on the top step.
My grandmother wrote 'The 3 Muscateers' at the top. But on the back she wrote 'the three astronauts' since we were all named for astronauts. Glen, Scott, and Dean were definitely common names for kids during the 60's. 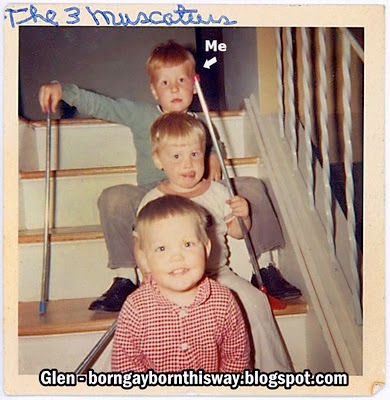 I don't recall the pic being snapped, but it is rather telling. We all had some sort of metal canes for the snapshot. My younger brother Dean (now a poet), is on the bottom step looking rather nonplussed about his. Scott (who ended up being the jock of the family) is in the middle, holding his like a javelin. And I'm looking rather dandy using it like walking cane, with my left arm flung casually over the step behind me. I also love the white socks and black shoes!

It must have been around 2nd grade that I recall having those feelings that I now recognize as my inherent gayness. There was a boy in class named Gary C, whose name I still remember after all these years. I just could not take my eyes off of him. I just wanted to be near him. I don't remember much more about him than that - but those memories of staring at him and longing for him are permanently etched in my brain.

During the 1960's and 1970's in the sticks of New Jersey, homosexuality was simply not discussed, even in church. It wasn't on anyone's radar, even though my town was only about an hour's drive away from Greenwich Village, NY.

While I knew instinctively that I was drawn to boys, and then men as I got older, I didn't fully integrate those feelings until much later after college.

I am the exact same age as you and grew up in Parsippany, due south! And also with 2 brothers, though I was the youngest. I know what you mean about gayness not being on the radar at that time. I also did not come out until my 20s, though I "knew" by the time I was 7 or 8.