In my photo, I was on vacation with my parents. I insisted on dressing up for Halloween, even if I couldn't go trick or treating. I didn't think that it was odd that I wanted to be a pirate, or that my pirate was male. 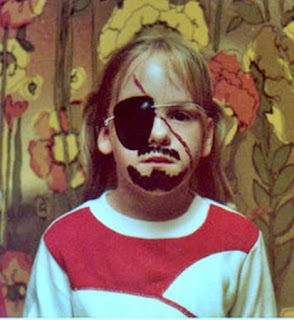 I didn't think it was odd to have a crush on Mrs. Walsh, my 2nd grade teacher. And not odd that I wanted to be a construction worker when I grew up.

Nor did I think it was odd to do my best to dress like a football player. I'd even steal my dad's socks and pull them up over my pants.

When I played, it was with my GI Joe or He-Man action figures.


My prized possession was my Sword of Omens (from "Thundercats"). I once got chased home after defending my friend's honor. Her much older brother was picking on her, so I tried chopping his head off with my wooden sword. It seemed like the logical thing to do at the time.

Acting like a boy never seemed odd to me. Odd was what happened after puberty.

Sexually, I was a very late bloomer. I remember being in 7th grade and randomly choosing one of the boys to be the one I had a crush on. In high school, I should have figured something was up when my first crush was on a guy - who I mistook for a girl when I first saw him.

I didn't really start coming to terms with myself till college, and even then I went kicking and screaming. I had pictures of Fairuza Balk all over my dorm-room and was insanely jealous of the time my best friend spent with her boyfriend.

And, I still insisted on dating guys. I was 21 the first time I had sex with a girl,
and that was when everything started making sense again.

I am from Kissimmee and graduated in 1983. Our little cow town has certainly grown up. I saw my first lesbian couple at the Catfish Place in St. Cloud (mom and pop resturant and very conservative) a few years ago. I was so happy to see them and extremly happy that they were accepted by everyone there.