Nick, age 5
Monclova, Ohio (1988)
I'd say I always had pizazz. I don't think I was ever over-the-top enough to be considered flamboyant, but I certainly was not meek or mild in my mannerisms. I never felt drastically different from the rest of my family, as everyone was a character. Home was a good place, even as my older brother came out at 25, and I was 17. I followed suit a year later. We were still treated the same, because we were the same: just colorful characters captured in photos like this one. 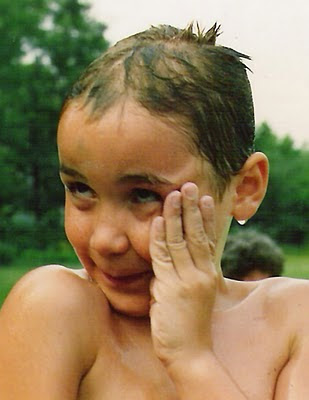 I was always attracted to guys, even at a very young age.

When teachers in elementary school announced the arrival of a new student, I would be gravely disappointed if the newcomer was a girl.

You see, I loved boys.

Boys were enigmatic to me and I didn't understand them. I observed them in class, running in herds on soccer fields, riding bikes in my neighborhood.

I didn't get what was so interesting, but I wanted to.

They excited me, like a toy I really wanted that was too expensive for my parents to buy. I couldn't get my hands on them, and I desperately wanted to!

Gay was such a negative term when I was growing up. It was used to harass and embarrass. I didn't want to be gay, and I denied it as I grew out of my childhood. When I was 15, however, I crumbled.

At a family party, the son of my mother's coworker said something to me I will never forget. I'd been running around, had gotten sweaty, and was looking for my sister. I found her in a group of kids, this boy included, and as I ran up to them, the first thing out of my mouth was, 'Phew, I'm really hot'.

This beautiful boy that changed my stubborn thoughts and unlocked my sexuality, looked me up and down and said, 'You sure are.' Everyone in the group took it as a joke and laughed about the absurdity. But I looked at him, stunned, and saw, for the first time in my life, that knowing look that gay men give each other. That look that travels across crowds of people, that sixth sense like your own personal dog whistle that raises every alarm in your head.

The knowing was instantaneous: Now I knew! GAY. I am gay.

The thing I knew since the days when this photo was taken, and the thing I denied for years, was true. Utterly and undeniably true. And then: relief.

What a wonderful story! Thanks for sharing. =^)

Very well written and a joy to read!

Boys "running in herds on the soccer field"--I never thought of it that way but it's absolutely hilarious! Great story--thanks so much for sharing it!

"But I looked at him, stunned, and saw, for the first time in my life, that knowing look that gay men give each other. That look that travels across crowds of people, that sixth sense like your own personal dog whistle that raises every alarm in your head."

I loved your whole story but that bit about gaydar is magic!

I've always felt like gays in a room are privy to a secret that no one else knows. I love that about us.

Wonderful story. I could really relate and remember thinking about the boys the same way you did. It was weird because the way you had worded was exactly how I felt, I just didn't know until now.

I have been out for 5 years now but was always confused by my childhood. Thank you for your story and removing a filter in my head that shielded me from examining my youth. You sound like my dream guy.