Dennis, age 8
San Diego, CA (1973)
In the pic on the right, that's me as a freshman at NYU in 1983. When I rediscovered this pic some time ago, I laughed for days. It would still be 20 years after that when I'd really come out of the closet. Before that happened, I served on a Mormon mission to Brazil, got married in the Mormon temple, had 4 kids, and continued pretending I was straight. 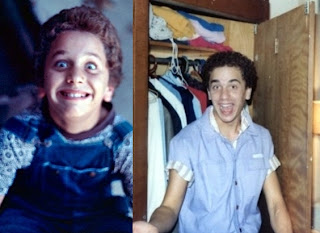 I don't remember the context of that dorm room picture, but it definitely seems Freudian or symbolic somehow. Why did I pretend I was coming out of a closet? Of course, I knew I was gay at the time. All my classmates were coming out, yet my smile belies the terror that I actually felt inside. My family and religious community would never accept me unconditionally as a gay man, and I knew it.

But how did I think I was fooling anyone? I was enamored with Timothy Hutton, the band Loverboy (mostly because of that album cover showing the butt in red leather pants), and I loved all things theater, especially musical theater. New York City welcomed me in its loving, understanding embrace, yet fear still made me to reject a very fundamental part of myself for years to come.

Even coming out 20 years later, I was right about the non-acceptance of my family and church community. But true peace really only comes by living on the outside in a manner consistent with how you feel on the inside. It feels incredible to finally have that. And my advice is do it sooner, rather than later.

Just wanted to add a brief comment about a movie I saw the other night. Your readers might find interesting. Called Hate Crime, found it on net-flicks. Its a 2005 Drama about a gay couple planning to marry when one of them is brutally attacked by religious bigots. The remaining partner and the his lover's mom go after the attacker to gather evidence against him because the police refuse to investigate further. It is a powerful, yet sad movie with a surprise ending that I really enjoyed.

As hard as it can be to be who you are . . . honesty is somehow always the best way to live, no matter who you are.
I hope that you are surrounded by those who love you and accept you for being honesly you.