I didn't really wear dresses after the age of 5, unless I had to. I always loved dressing-up, usually as some kind of Victorian urchin. I was pretty obsessed with the musical "Oliver," and while my friends dressed up as Disney Princesses, I was dressing up as the Artful Dodger. This picture makes me smile, I look so pleased with myself. 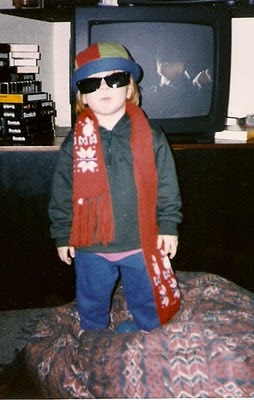 I always knew I was different, but I wasn't really sure what it was that made me different.

For a while, I thought I wanted to be a boy, or might hate being girl. So I was branded a "tomboy" for quite a while.

In early adolescence I spent quite a lot of time desperately hoping that I would fancy a boy, but it never really happened.

I thought I was odd, and so I began to lie about who I was attracted to, hoping it would eventually come true.

It wasn't until I was around 15 that I started to realize that I liked girls, although on some level I guess I already knew. I came out when I was 17, and people were generally unsurprised.

My message for young LGBT people would be to always stay true to yourself; don't hide who you are because of other people's bigotry. Stay safe, and love yourself.

It is a great post! I consider too that everyone should stay true to yourself.

you are awesome.!!!! and love the blog