Liliana, age 8
Los Angeles, CA 1981
I hated dresses as a child. I remember my mom would force them on me and I just felt she was being cruel by making me wear something I didn't like. I'm an only child, and my mom tried in vain to mold me into the perfect young lady she wanted me to be. 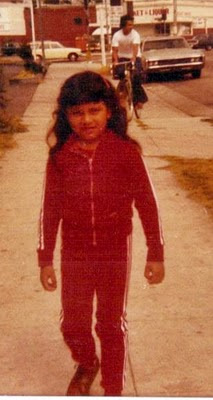 Back then I was really into watching "CHiPs," "Battlestar Galactica", and I remember looking at rap album covers like Run DMC, so I began really digging the track suits. Just a short few years later I would learn to break-dance. Ha ha ha!

I had nothing but boys as friends, and enjoyed all things relating to them, such as Matchbox cars and GI Joe action figures.

And since it was the early 80's - I was fascinated with outer space and Star Wars. In fact, we use to role play - and yes, I always wanted to either be Luke Skywalker or Han Solo.

I never thought of myself as being gay, but other kids called me a tomboy at school, and it was relentless.

My young life was awkward. I remember having these feelings for all sorts of girls and never feeling that way about a boy at all. I guess in my case, I feel I was born this way. And personally, I love it.

But I didn't officially come out of the closet until my early 30's, and guess what - it was no big deal. I guess everyone already just figured out I was gay.

I am now living my life the way I guess I always wanted to, and I have an amazingly beautiful girlfriend to show for it. I love who I am and the experiences I've had, and hopefully will continue to have until a very old age.

My advice for gay kids is: Hang in there. It does get much better.
Even for a young Salvadoran-American growing up in a very conservative home.