Richard, age 7
Buena Vista, GA (1996)
This photo was during Christmastime at my step-grandmother's house. I'd asked for clothes, a pirate ship, and a few other toys. I had a vivid imagination, I loved to learn (at times), and to draw (I won first prize many times in art contests), and to escape from reality with my childhood toys. 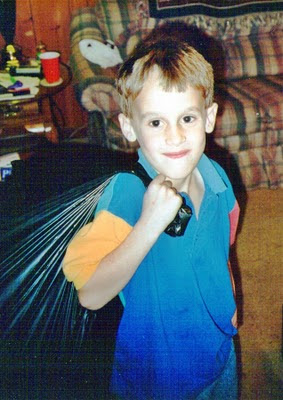 Growing up in Georgia, my lack of masculine interests were more subtle. I hated hunting, and I would not touch fish or worms when fishing.

I didn't realize I was categorized as gay/feminine until my family and friends began to point it out.

In our culture, gay and feminine are tied together a lot. And around age 11, I began to realize that some of my traits were not desired, or to be seen or heard.

My grandfather, Peapaw, wanted me to play sports, which I didn't care for at all.

My step-mother once told me I looked like a sissy when I had a travel bag over my shoulder or my hands on my hips (like in the photo). I also enjoyed playing mommy or house with my sister and her friends. But the ridicule made me afraid to do things like this. I also didn't have the most masculine behavior or voice.

The older I got, the more afraid I got of being myself. I tried the track team,
I tried hanging with guys, and I attempted to spend more time with my father on his construction jobs. The guys I tried to befriend made me nervous, and I realized I was kind of attracted to some of them.

Coming out was stressful and depressing. There were times where I really wanted to go into the woods and kill myself. I knew I was gay at 11, and my father found out through church members and small town gossip. The pastor at my church asked me to leave and to not come back unless I wanted to change. I did not, and haven't been back to a church since.

During Junior prom, I confirmed it with everyone by dancing with my first boyfriend. High school and family life was rough, but I had a group of supportive school friends who were always there for me. I did get bullied though, as I was the only openly gay guy at school. I'm thankful that my gay uncle and his partner helped me during this time, because he suffered similar things with my family and had left. I am so thankful for that, as it encouraged me a lot!

Today at 21 and being out for 5 years, I've realized that I am who I am! My whole family knows, but most are not okay with me being gay. This is the reason I moved from my hometown to a more accepting city. I have a deep country accent, and no longer a girly voice. I'm a very emotional person and a very caring person, and I want children and a husband one day.

But does the fact of my sexuality matter!? No, I am ME!
Categorize me as gay, masculine, or not - and I WAS born this way!

THANKS FOR POSTING IT!

You are you and don't ever let anyone tell you different.

You may not have known it then or even now, but by being out in school, I am sure you helped a lot of people who were deep in the closet by being a postive role model. You were and are a very brave man and should be very proud of your self as all the people who share their stories on this wonderful blog! Congratulations for being you!!!

Loved this blog post. I'm pretty confident that you have changed many peoples lives throughout the years from coming out and still to this day you influence many people with your actions and loving self. I'm glad to have you in my life and I wouldn't change it for a thing. Love ya

I have known you for quite a good time now. And we have gone through similar things at the same time with coming out and family issues. You have always been an inspiration for me, and have always helped me get through the toughest of situations. And I know that you have inspired many others to do the same, in just accepting that we are born this way, and we are never going to change.

It's terrible that you were made to feel scared to be who you were. I'm so happy that you have your uncle and his partner for support during that time. Maybe your family will come around gradually . :) Thanks for sharing your story!

Simply beautiful. Your strength encourages others :)

You have a nice informative pictorial Blog

I'm sad to hear that you had to leave your church and haven't been back to church again. Spiritual life is important and I hope you reach out to one of the many gay-inclusive churches so that you can heal the part of yourself that feels God and gayness cannot work together. I go to a progressive Methodist church (a reconciling congregation) that is gay-welcoming and affirming. You are wonderful and perfect and your creator thinks so too.

I mean no disrespect to anyone when I point out that "spiritual life is important" to people to whom spiritual life is important.
It is not, however, necessarily important to other people. In fact, the very concept might simply not exist for many people.
Amazingly enough, many of us are quite comfortable living lives with no such dimension at all. (I realize this may come as a shock to some. We have a good supply of smelling salts, and a fainting couch, handy should anyone feel the need.)
And just as we want people to accept us as we are, and not as they might wish us to be, in the domains of friendship, family, love, sex, relationships, and marriage or lack thereof, it is also necessary that we respect everyone's own assessments of what is and is not important to them, including any "spiritual" dimension(s)or lack thereof.
If church, religion, religious practice, and/or religious community are important to Richard, I join in hoping that he finds appropriate, effective, and comfortable groups, institutions, and people with whom to pursue such.
But if he has determined, or does determine at any point, that these are no longer important to him (if they ever were), then I wish him equal success at following his own paths, wherever they may lead him -- and doing so without helpful judgments from people who don't even know him.