I remember secretly watching Showtime on a school night. I don't remember what was said, but I remember exactly how I felt when "Alice" winked at the girl across from her on "The L Word." I totally died from that small interaction. Died. 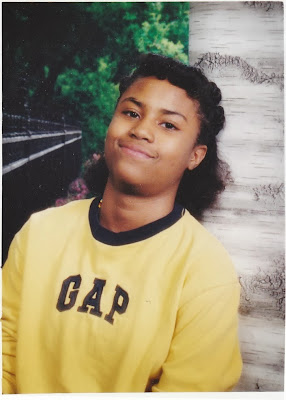 I can remember as far back as 3rd grade when the feelings arose.
I was always a tomboy and I loathed any attempt to try to mask that fact with dresses and frills.

Awkward would be the one word to sum it up. And I have many women in my family who have perpetuated that awkwardness.

Then the realization did come, and the second I laid eyes on it, my stomach fell. I knew what I saw and didn't like it.

But a cute girl in my class did like it, which made me feel a bit better. My mom did too, which eased that feeling even more. My grandmother, however, tossed those positive reinforcements out the window, cocked her head to the side and said: "You look like one of those ‘What’s Up’ girls."

"What!?" I said, even though I totally knew. "Gay" she said. And now my stomach had left the building. I went to my room and stared off in silence, with that wrenching feeling like she insulted my entire being.

I was never ashamed of being gay on the inside, just afraid that it had the power to show on the outside. I was aware that it was taboo. And I was aware that I didn’t want to be taboo in anyone’s eyes.

Every picture of me after that until high school was an awkward rollercoaster. How should I sit? Oh God, did I do that smirk? Is my Adam's apple the ONLY thing you can see?

I sometimes carry that particular self-consciousness today. Partly because I also operate very femme, things have changed, and I'm not as rough as I used to be.

But looking back on things now, I would tell today's youth not to disconnect from any of it, but to embrace it all - and just smile for your picture.

"We need your voice. Your voice is important. Without your voice, part of me gets lost. Because each person we lose, is a loss for everyone." – In The Life, TV

Paul, if possible, of course, cites one of his comments on the matter of morangomacho.blogspot.com on his blog. I think it would be interesting, you put a feature of the blog's visibility or mentioning your sites. One form of partnership.
Thanks!
Hug and Success.

I obsessively read this blog. This is one of the most poignant and, perhaps, helpful stories I've read yet. This story can apply to all of us, gay or not. Life is SO MUCH better once you stop fighting who you are and "just smile."

all of the stories on this blog are fantastic, i love reading them everyday. This story is another inspiration. Thanks.

I am a straight girl and I think you look beautiful in that picture. I will kill to have that perfect skin. : )