This was shot on a family vacation to Rangeley Lakes, Maine. My parents, sister, grandparents, aunt and I all stayed in a cool, cozy rented cabin on the water. 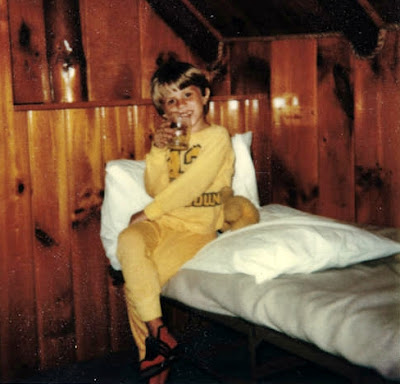 My sister and I were excited to sleep in the loft.

My parents bought us a Polaroid camera to take on the trip, and my sister and I were pretending we were models.

This is a shot just before going to bed. I'm taking a sip of water, but it really looks like I am having a night-cap.

And truth be told, we weren't playing model anymore.
I really was just sitting like that.

As I got older, this photo would elicit a variety of responses when we would look through family photo albums. My mother would smile and pat me on the head, my father would grimace and groan, and my sister would giggle. I rather liked it, but sensed there was something "wrong" with it.

My mother has since passed away, but the rest of my family is now rather proud of this photo. It is  evidence that I was indeed born with a little sparkle. If my mother were still here, I am 100% sure this would have ended up framed on the fireplace mantle. But I took the photo home before my father could do the same.

As for when I "knew" I think this photo is proof that I always had "it" and flaunted "it."

While I didn't end up being the football playing son my dad had hoped for,
I ended up being the type of son he never knew he wanted. I'm now in Provincetown, and he makes a trip to visit every summer. We get along great, and he even looks forward to going to the drag shows with me.

My first crush was on Bo Duke (John Schneider on the "Dukes of Hazzard"). When I told my friends in Hopewell Elementary School, they all went 'Eeewww!' Whatever. I still loved my "Dukes of Hazzard" lunchbox, and I fantasized that
Bo Duke would pick me up and rescue me in the General Lee.

While that didn't happen, my partner now does resemble John Schneider a bit.
As they say, the first cut is the deepest.

And things do indeed get better. Much, much better.

I definitely love this blog! FAVOLOSO!!!

Found you through blogs of note -

what a beautiful message of hope you are spreading to kids/teenagers/adults who are struggling!

My god! What a beautiful site! And beautiful pics too! I'm gay myself so this hits home. Funny too.

This is awesome, I'm from Taunton too!