Chrissy, age 8
Kaplan, LA (1986)
This picture was taken at the peak of me being called a tomboy. People often asked why I don't play with girls or dolls more often, and I'd tell them that they bore me. I also quickly informed people that I hated Barbie and much preferred He-Man, Ninja Turtles, and Nintendo. I recall wondering why it even mattered. 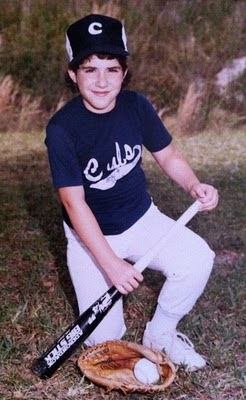 I grew up in Cajun Country, where gender roles are emphasized, almost to a caricature. While I was enrolled in ballet and gymnastics - until I landed on a girl's head, then quit - I also enjoyed climbing trees, karate lessons, and playing baseball with the boys.

My first cognizant crush on a girl was about when I was in 8th grade; she was a pretty blond named Nichole. As a practicing Roman Catholic, I faced a lot of inner turmoil when I realized I was attracted to women.

My friends and family, however, were nothing short of phenomenal in accepting me when I came out at age 18.

I was a lot harsher on myself than anyone else, except maybe my fundamentalist Christian brother. We went 3 years without speaking after I came out, but we are now civil to one another.

Staying in the closet for so long was one of the most detrimental things I've done to my self-esteem. I encourage all young, closeted LGBT's to be bold and come out as soon as it's safe. It may very well go a lot better than you expect.

And anyone who rejects you doesn't deserve to have you in your life.

He is "civil" to you, eh? I have a "fundy" brother myself and with some effort could probably have developed that sort of a relationship with him and his family. However, I told him as long as he honestly had to view me and other LGBT people as "sinners" (or, in their phony-humane way of typically putting it, that "acting on it is sinful"), they could all kiss my royal bunda. That was years ago.

You were real cute :3

Loved your story, Chrissy! Thanks for sharing...you were and still are very adorable ;)