Julia, age 6
Sydney, Australia (1988)
This is Christmas day, and my sisters and their "long lost brother". Luckily my parents were supportive of my rejection of gender roles in their gift-giving. And thanks to my nanna who made those awesome pajamas. 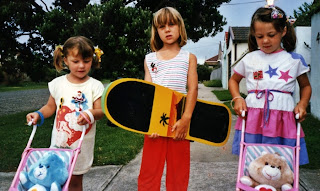 A year before this photo, my neighbors gave me a Barbie doll, which I proceeded to throw back over the fence into their yard. It was totally out of character for me, being so rude to people that weren't my family. But I was a bit pissed off.

Pissed off, because I played with their son quite often, and they should've known I wasn't into such "girly" toys. I still feel quite ashamed, because they were actually quite nice people. A big sorry to Mr. & Mrs. Lee, wherever you might be.

I started noticing that I was drawn to women and girls my own age a couple of years after this photo was taken. But it wasn't until I started high school at 12, that I fell absolutely in love with a girl in my class.

At that point, I knew for certain that I was a massive queer.

We had moved to a small regional coastal town when I was 8, and I was fairly quiet as a teenager so, I didn't feel confident enough to come out during high school. Despite having boyfriends until university, I was still getting into queer popular culture, and listening to Ani Difranco, Tori Amos, and Madonna.

When I finally came out, it amazed me that I had so many similar interests to other queers. Here I was thinking I was all unique, only to find out that I was just another stereotypical lezbot. Not that it bothers me, and it's great to finally be out.

The only regret I have is giving up skateboarding - I tried to have a go last year but had an unfortunate run in with a gum nut which put an end to that endeavour. Oh, to be a fearless tomboy again!

Too bad that you didn't stay in Sydney as they have one of the best gay aditudes ever. Go Oxford Street! I am really happy that it turned out well for you.