Ryan & Kevin, age 5
Mansfield, Texas (1996)
I'm Ryan (on the left), and this was just a normal day, playing with my - also gay - twin brother Kevin. We'd get in our baby blankets and pretend we were Cinderella and Snow White and have a blast putting on little shows for everyone. I remember singing along to cast recordings of "Annie" and "Wizard of Oz" all the time. We both loved to sing, act and dance, and still do. 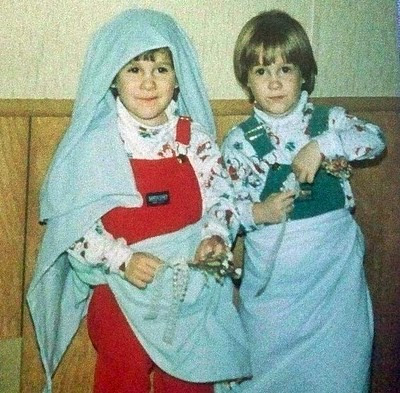 I never thought I was that different than other little kids my age. But I didn’t exactly like to do boy stuff like go camping or be outside. I mainly liked doing the girl stuff. I remember we had a neighbor we played with, and she had a lot of Barbies. Kevin and I would play with them whenever we liked.

When we were 6, my mom asked us what we wanted for Christmas, and we proudly replied, 'We want Fairy Barbies.'  That must have been a big surprise for our parents, but that very Christmas we got our very own Barbies! It was one of my favorite Christmases of all time.

Kevin and I weren't that popular during elementary school. It was very unhappy times for us, and I remember being made fun of for being gay when I was like 9. I didn't even know what the word meant! I thought it meant happy, so in a way it was a compliment. But I knew the way kids said it, that it was no compliment. I didn't know why people were picking on me, just that I felt a little unwanted.

I remember in junior high phys. ed class that the guys talked about which girls were hot. I knew when a girl was more attractive, but I also knew which guy was more attractive. I felt like the only boy looking at the other boys in that class. I thought that every guy would notice when a hot guy would walk by.

It wasn't until my freshman year of high school that I came out, first to my three best girl friends. They took it well, so I came out to the rest of the school. Everyone took it well, and most kids already knew. This got me picked on a little, but by then I knew how to fight for myself. There was one guy who picked on me in the halls, but his bullying was more psychological than physical.

Coming out to my parents wasn't a great situation. A kid from school told his parents that I came out, and he had a problem with it. They then called my parents - who I had not told yet. At that point, Kevin and I both came out to our mom, and she was great. I think she already knew (we'd asked for Barbies for heaven’s sake!), but my dad took longer getting used to it.

I adore these cartoon films. It is a lot of memoirs. My favourite is "Beauty and the Beast"..

I LOVE the Sound of Music and Wizard of Oz!!!!

My eldest daughter who is 8 is a complete tomboy. She's always enjoyed playing with the boys and preferred boys clothes. I've let her know that she'll never be a boy and she's fine with that but otherwise she's a happy, confident and fiercely independent little girl. Reading this blog, its in the back of my mind and often wonder what will happen when she hits puberty.

This is a beautiful story. I was relieved to see that you two were indeed given the requested Barbies for Christmas, and it must have been calming (in a way) for you to have each other when the time came to tell your parents.

That's a cute story, but I find it odd how quickly you brushed over the subject of your high school bully. It's almost as if you are dismissing it because it was only emotional abuse, not physical. Still, thank you for sharing your experiences as a child. And the fact that both you and your brother are gay should only help confirm that being born gay has a part to do with genetics.