Mark, age 16
Portland, OR (1962)
It's been a great time reading the inspired and heartfelt blog posts here. Now at age 64, it has allowed me to remember that as a kid, I always sort-of knew something was different about me. But in the 1950's, in my little Oregon cow-town, in a religious home, I knew nothing about life until well into college. 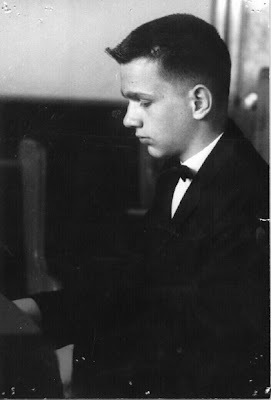 I remember wanting a dollhouse at age 5, and having a crush on Rock Hudson the first time I saw him on TV. And KNOWING I needed to someday get out of that remote town I lived in. None of those feelings were connected to farming life, where football was king.

This pic is my favorite, since being the piano guy at 16 kept me "in" enough at that age to be included. Although I always felt I was alone somehow.

As others experienced, I was aware of being different, but not why or what. So I could not "change" anything. I sort of had to let myself be snickered at sometimes during phys ed classes.

The most intense day I spent in high school was trying to "explain" to my "best friend" - who was unaware of the crush I had on him - that I was upset he was spending so much time with his girlfriend.

In the middle of that awkward conversation, I said out loud (while becoming aware of it), 'This sounds like a girlfriend talk, doesn’t it?'  It bothered me so much, I excused myself and went home. I spent that evening trying to understand what happened. And our friendship became awkward from then on.

Lots of things happened that I should have been aware were gay-like, but there was SO little information back then. I had NO reference for those experiences at all. I simply thought if I stayed "religious" I'd outgrow those "mystery" feelings.

This is a beautiful story. The truth and passion in your words has truly touched me. Thank you for sharing your experience, and in such an eloquent and genuine way.