This tea set was one of my cousin Suzanne's Christmas gifts. We're 7 months apart and we'd sometimes swap Christmas toys. One year we both got portable record players with companion story books. I got "Peter Rabbit" and Suzanne "Sleeping Beauty" and we traded. She always shared her Barbies with me, too.
It's one of the reasons I grew so close to Suzanne, as she never judged me about playing with "girl" toys. She's a grandmother now and we're still very close. 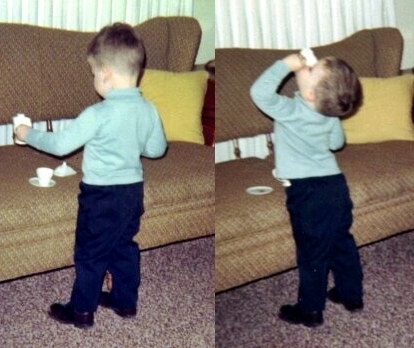 I learned from my family's reactions to my desire to play house (or dress up, or to have a Ken doll) that there was something odd in wanting these things. But I was totally ignorant of what it all meant. But in 4th grade, I asked my mother what the name I was being called on the playground meant. She told me that a "homo" was a man who lived with another man, like she lived with my father.

I could tell from the way she described it that she disapproved of "homos" too.
So I pretended to be disgusted by it. As I felt certain she was convinced that I was one too, I went upstairs and cried. There was a name for it, I knew it's what I was, and that I'd be hated for it. And I was horrified that everyone else could tell.

I felt I was the only one. I tried to butch it up, but wasn't very good at playing the lie. I was bullied remorselessly until I got older, and started making friends outside of high school and college. The bullying not only tortured me, it also did a number on my parents. It put them in a very difficult position of protecting me, while standing by and teaching me accepted social standards for male behavior.

That drove a wedge between us, even as they tried to comfort my regular crying fits of frustration and humiliation. I didn't feel they understood me, and I had no way to understand what they were going through either.

My father tells the story of how he went to work one day, and left his happy, gregarious, open, smiling son. And when he returned I was sullen, withdrawn and suspicious. My father thought that I was angry with him. We had a very hard time until after I was 26 and came out to them. He and my mother already knew, though she was deep in denial. But my dad already accepted me. He helped my mother through her problems with my sexuality, and continued to identify and grapple with his issues.

I wish that the social mores back then hadn't soured our relationship. But we're close now, we focus on the present, and my mother continues to come along.

When I think about today's gay youth, I see some who still struggle with the difficulties that I, and so many others, had. But I also see so many young people who are defining the world with new eyes and fewer boundaries. They're evidence of the positive effect we've had on our world, by refusing to live in the shadows.

And they will go on to tell their stories, and those who struggle will become fewer and fewer. More people will realize that we are people, we are somewhere in every family, and we deserve to be treated fairly and with respect.

And soon accept that being gay isn't about what we do in bed, but who we love.

Kevin, you've written such a great entry here. Thanks for telling your story! xo Tom O'C

You brought me to tears, thanks for sharing
*hugs