My childhood dream was to be Snow White. Although I couldn't whistle, I regaled everyone with my version of "Whistle While You Work," and raised some eyebrows waltzing through the house singing "Someday My Prince Will Come" (yes, Prince Charming was my first celebrity crush). 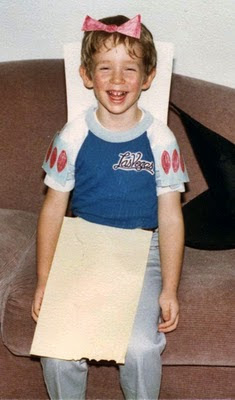 I also started channeling my creative energy into another outlet: drawing. My parents sought the mentoring of a local artist, who took me under her wing when I was 4, and she taught me that anything I imagined could come to life on canvas.

Soon, every wall in our house was covered with oil-painted tributes to my favorite heroines. I then decided that I didn’t want to be Snow White when I grew up. I wanted to be an artist.

I'm grateful that I had a mentor who cared enough to fuel this creative flame, because the other flaming aspects of my personality presented some problems at school.

Boys with high-pitched voices - whose approach to running laps in gym class could be described as "prancing" - didn’t fare well. I learned that in order to survive, I had to conceal those aspects of my personality that made me different.

I wasn't able to describe what I was covering up as "gay" yet, though. That realization didn’t fully hit me until right after college. Still, I knew there was something inside me that needed to be squelched, or it would ruin everything.

Fortunately, this is a fairy tale with a happy ending.

I found my way out of the dark, enchanted forest to a place of self-acceptance.
I even found my own handsome prince, and our life together is as close to "happily ever after" as I can imagine, this side of the Magic Kingdom

I've also continued pursuing my dream to be an artist, and my paintings - many of which explore my journey out of the closet - are displayed in galleries across the country.

Art was my salvation during the most difficult parts of my childhood, and I encourage others who struggle with similar issues to find a way to creatively express themselves.

What a great story!!!

Beautiful blog, found it in blog of note... I'm not gay, but I do appreciate you courage, style, everything!
Keep up the good work!
Greetings from Greece

I grew up in Grove City, as well. In fact, right when this picture of you was taken, I was in the process of coming out to my friends at Grove City High School. I hope things were a little easier for you when you got there. Stay well!

I'm so glad my partner and I own one of your prints, Paul. It means even more to us now.

We were already your patrons - now, you can consider us your adoring fans!

Bravo Paul! I loved it and I love your art. I have been following you for almost two years now. Good stuff.

I agree about the creative venues being an helpful outlet. I am a writer - and have been writing about boys in love since 5th grade (much to Mrs. Vanderveer's chagrin.) It was a hard road, but it helped during those long, lonely days where I 'knew' something set me apart from the others, but couldn't put my finger on it.

Thanks for a very entertaining story.

Thanks so much for sharing this. Your dedication to LGBTQ issues is inspiring. I didn't realize you were such a talented writer as well.

I want to say LOL for I love the creative way of creating the Snow White outfit with paper...that's too cute!