Sam, age 10
Queensland, Australia (1981)
At this age, I had no idea what a lesbian was. Nobody said 'that's so gay' back in those days! I did, however, have a series of crushes on my 'best friends' and was in the habit of convincing the other girls at school to practice kissing with me. 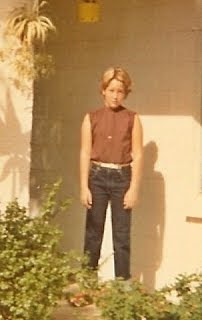 I remember going to one school friend's party where we all hid under the house to play spin-the-bottle.

I tried kissing some of the boys, but it wasn't nearly as much fun as kissing one of the girls.

So my 'best friend' and I found our own corner to kiss in. Nobody else seemed to notice or care!

In those days, I loved Cyndi Lauper, Madonna, and Joan Jett - girls who didn't play by the rules.

Many years later, I went to the movies to see a movie called "Go Fish" - and I had no idea it was about lesbians.

When I walked out of the movie I said to my friend:
'I'm one of those girls - I'm a lesbian!'