Summer of 1966 was my certain summer. That's me on the left and my cousin Ranny on the right. He was from the big city (Denver) and was spending the summer on our farm in western Kansas. This was a big deal for me, as I didn’t have many friends, and was already branded a sissy by my small town peers. 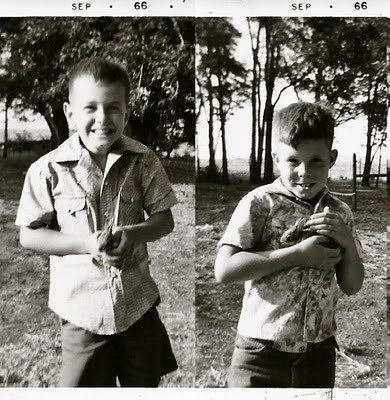 In the photo, I'm wearing my favorite shorts, cotton twill with an elastic waist.
They were so much more comfortable than cut-off jeans! Ranny had a similar pair, and one afternoon I told him, 'Wear your shorts with no underwear and meet me in the hayloft.' The love of being naked is one I have to this day

I don’t know how many times we revisited the hayloft, to just shed our clothes and revel in the air on our bodies. One time, I heard my mother calling as she was climbing the ladder! I hid behind the bales of hay, but she knew I was there, as my shorts were lying at her feet. Ranny just stood there, having wisely stayed in his clothes that day.

I slunk out, the guilty look on my face confirming everything. She hadn’t caught us doing anything, but she didn’t have to. She knew, all her fears realized. She marched me downstairs, refusing to let me get dressed. Pulling a leather strap from the tack room, she bent me over and whipped me, racked with sobbing.

That evening, my father had a quiet talk with me. Which was unusual, as he usually wielded the belt and my mother did the talking. I'm sure he thought he had the most difficult task that day.

Ranny and I never talked about it. I don't know if he turned out to be gay, as he was killed in a car wreck at 16.

After that, I realized that the things kids had called me and what I was feeling were connected. And my parents had just confirmed what I already knew: that I had to keep it a dirty secret. I tamped it down by being the best little boy I could. Though not too good, lest I draw attention to myself.

In high school I sought refuge in the church, but by my senior year realized I was just running away from the obvious. One more year and I could be free!
I dumped the church and started looking for colleges with gay student groups.

Today, my mother still won't talk to me about my sexuality.
She says she'd be just as uncomfortable talking to my brother about his marriage.

Dennis, we are about the same age and I can't tell you how similar our experiences are. What is it about our age group that was the target of shame, punnishment and then the best friend being killled in a car accident? Plus we have similat tastes. Big Hug ~ Lenny