I think this picture is funny, because I'm so excited about my pink Easter basket. I think I'm more excited than Denise here, my younger, 6-year old sister. 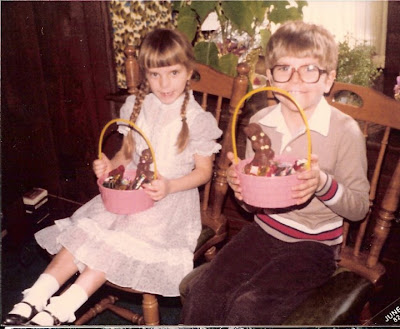 Growing up in a small town in Indiana, I always knew I was different than other boys. I had a very high voice all through puberty, and I was very androgynous. So it was very hard for people to tell whether I was a boy or a girl.

I remember being attracted to boys/men in the 1st grade, having a huge crush on my swimming instructor. All through grade school, I much preferred playing with the girls on the playground, instead of anything involving a ball.

Music and stage quickly became my vice. I was a boy soprano up until 8th grade, then an alto as a freshman. But that also led to many taunts of "f*g" and "sissy."

I remember playing superheroes with my cousins at family outings, and I always laid claim on being "Wonder Woman." I could never figure out why none of them ever argued with me about being her - not even my girl cousins!

But today - I am who I am. I have a wonderful family who accepts me and my partner. While they're fundamental Christians who will never approve of me being gay, they do accept and love me!

My advice to young people, or any people with a fear of coming out is:
Most of the people you're afraid to tell that you're gay - already know. They're just waiting for you to be comfortable enough with yourself to approach them with it.

It's generally not a surprise to anyone. And if they say it is, they're more than likely lying for one reason or another.

You look like the kid from the Christmas Story... "You'll shoot your eye out kid!"