As a 10-year-old boy living in Charleston, South Carolina, I liked designing mazes, which accounts for the pen in my hand in this photo. My shirt bears the likeness of Spock from "Star Trek," my favorite TV show. 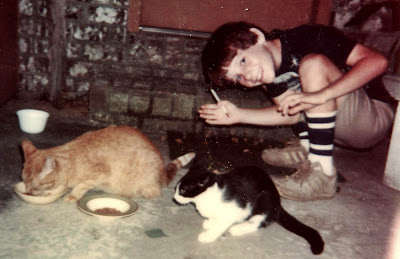 This was snapped on my requested Polaroid instant camera I got for Christmas. Each photo cost two dollars, my entire allowance at the time, so I rationed each one like a miser. I usually shot our family, and this is a rare picture of me, taken by my brother.

It was a different era in the 1970's. My parents told me homosexuality was sick, and so I thought myself sick. I suffered from depression, guilt, and all the usual head trips. But our attitudes changed over time. Now, we all believe differently.

I have always been gay, as far back as I can remember. But I didn't realize what it meant until my late teens. I was naive about sexuality, even while being quite precocious. I experimented without being fully aware of the implications.

I compartmentalized the issue of sexuality with the expectation that I would change later, and that it would not be a life-long thing.

I came out to my parents as bisexual at the age 18. They were supportive, but had fears and doubts at first. I eventually found a partner, and we have been very happy together for the past 14 years.

To young gays, I would say that life definitely gets better, particularly if one finds the right person to live with. Someone trustworthy, honest, kind, and considerate.