Ryan, age 4
Taree, NSW, Australia (1987)
I was born in a small country town, and can remember dressing up on every occasion possible. I couldn't conceive why my boy neighbors never wanted to join in. But here I am, on the far left with my neighbors Mat & Katherine. 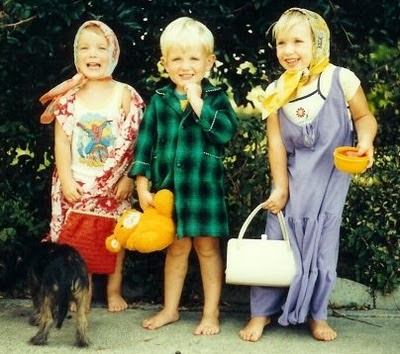 I don't remember when I 'realized' I was gay, but I always felt conflicted. I was about 10 when the boys on my street found a dirty magazine. I remember launching into a diatribe about how female parts were boring and all looked the same. And that male parts were much more interesting, because they were all different. But I had no idea what this would all mean in the future.

I recall being attracted to boys and teachers in my class around the same age. But even without any physical contact, I had my heart broken while dating girls until I was 18. It never stopped me being referred to as a f*ggot, or being picked on by the guys at school. I decided that I didn't want to be a f*ggot, and I would do everything in my power to deny it.

My coming out was rather backward. I rebelled and left home at 15 and was hanging out in gay bars as part of my 'double life.'  My mother asked on a visit if 'All of my friends thought that she knew I was gay'. I told her she was being preposterous, and couldn't possibly know what she was talking about.

Well, she also told me that my 'uncle' from a photo we had was not one of my aunt's ex-husbands, but rather her best gay friend. And, that the lady who babysat me as a child in Sydney? Well, she wasn't actually a lady...

I never gave my parents enough credit, and drove a wedge of between us, based mostly on my shame. In school, my sister hated me for being her f*ggot brother, and my stoic father was confronted by my flamboyance. He was convinced gay men were out to get me.

Despite the photo, I consider myself to be an athletic and masculine gay man. And I now have the love and support of my family behind me.