Zachary, age 7
Mount Airy, NC (1997)
I obsessed over the Spice Girls since their first album. I had the Barbies, action figures, and even dressed up like Posh Spice (Victoria Beckham) sometimes. 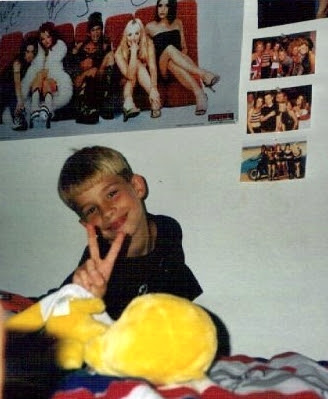 Until the 6th grade, people called me "Spice Boy." I was teased daily, but I wouldn't let that stop my love of the Spice Girls, and just being who I was.

I knew I was gay very early, probably around 10-years old.

I would always watch pro wrestling, because I liked to see men in tight, little uniforms.

I never had a specific male crush back then. I was just drawn to shirtless, attractive men in general. And nothing has changed on that level.


Coming out was the hardest thing I have ever had to do.

However, it was the best decision I have ever made.
I am happy with who I am, and I'm proud to be a gay American.
Posted by DJ Paul V. at 12:01 PM

LOVE the Spice Girls poster in the background!!