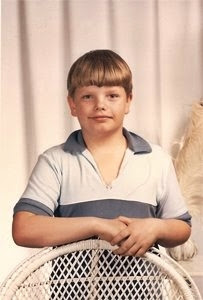 In 1985, I was a 9-year old boy infatuated with superheroes, He-Man, and professional wrestling. I think that should have been my first indication there was something different about me.

It wasn't until around age 11 that I had a word to put with my feelings, and knew concretely that I was gay.

Now as an adult, I am still head over heels about superheroes.

And I know that as difficult as it was being different, I wouldn't have traded it for the world.

Gay by birth, Geek by choice.