Johnny, age 3
Rockford, IL (1949)
That's me, wedged between my brother and my father at our favorite summer retreat: Clear Lake, Wisconsin. Even though I look reasonably happy, I probably wasn't, as I hated having my picture taken. 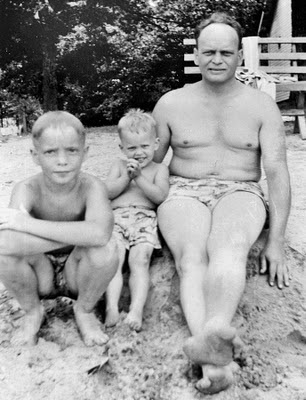 I can't remember a time when I didn't know I was somehow different than other boys.

The Christmas after this picture was taken, I was obsessed with getting a dollhouse from Santa. Amazingly, my parents got me one. That probably wasn't the first clue they had.

As I grew older, I began to pick up little hints and suggestions that the way I acted wasn't really acceptable.

I remember telling my mother about junior high crushes I had on other boys, until I figured out she didn't really want to hear it.

I had been having crushes on boys for a long time. I had a big crush on Bobby Driscoll, who played Jim Hawkins in the Disney version of "Treasure Island" - and I was only 4-years old. But my parents never said anything.

And they said nothing when I never once had a date in junior and senior high school. Or in college, for that matter. They never said anything when I never played baseball or didn't do other boyish things, preferring instead to read.

The problem, was there were no gay role models in our conservative town. There was no way for me to even put a label on the feelings I had. When my best friend and I fooled around at age 11, it didn't open a new world for me; it pushed me further back into the closet.

It took me a long time to accept myself for what I am, and I had to go through a lot of pain and sorrow to get there.

If I have any advice to give young gay kids, it is:
Don’t be afraid to be who you know you are. You can't live in denial all your life.

All the suffering I experienced did teach me a valuable lesson, however: that I'm not the only one who is suffering. I've been a Buddhist monk since 1993, and I now dedicate my life to helping others find true happiness. It's the least I can do.