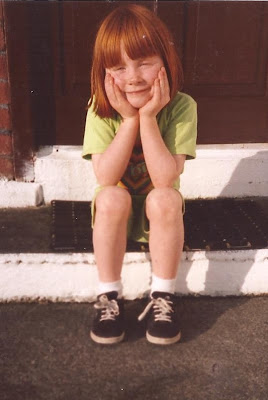 Growing up in Ireland, I was always a little tomboy. I didn't mind getting dirty,  and I spent around 6 years in a pair of denim dungarees. This was shot at my grandmother's farm, and notice the rainbows on my t-shirt - very fitting!

I realized when I was very young that I felt different from other girls. My first crush was Ginger Spice from the Spice Girls. I think it was our common red-headedness that sealed the deal for me. I wanted to marry her.

I didn't realize till later that most girls my age wanted to marry the Backstreet Boys instead.


I never chose to be anything: I was just a carefree, little, gay Irish girl from day one. That's who I see when I look at this picture now.

I came out to my parents when I was 13, and they were fantastic about it. They loved me even more for the courage it took to do so. They even walked with me last year in the Gay Pride parade.

I may only be 18 now, but I feel like I have wisdom and experience beyond my years from coming out so early.

To anyone out there who feels like they need to hide I say this: Hiding who you are may be easier, but trust me, the freedom that comes with being honest, open and proud is truly a million times better. I wouldn't change myself for the world.

Love the gay child you once were, and love the gay adult you are now.

This is a wonderful blog, I really respect your ideals.

Best of luck Born This Way... I hope you win the google blog award!!!

I think you're story is great! I've always believed it's better to be yourself to the fullest and maybe take a few bullets on the way. Looks like you've been very lucky but nonetheless an inspiration!

Nice picture and story. I also love Geri secretly. And like so much the part when you said you were a little gay girl with no worries. :D

That last line brought me to tears. Awesome story.

Hell yeah, go redheads!! Again, like I said to Cam on her page, it's really awesome to read something from someone who's only a few years older than me. Epic story. :-D

I loved your story!