Tracey, age 8
Algonquin, IL (1978)
I have no memory of being an A.A.Y.O. Pixie, but I remember this red baseball cap. A friend of my dad's came to the house, and my brother and I were outside. 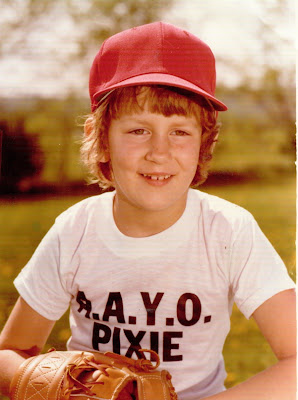 "How old are your sons?" he asked. Horrified, my father demanded I never wear that cap again. 'But Daaaaad, why not?' I whined.

And he replied, "Boys wear baseball hats. You don't want people thinking you're a boy, do you?'

For the first time, I realized that my brother and I were not the same. And that my life would be different, because I was a girl.
I felt wrong. I felt "other."

Over the years, I experienced this feeling of "otherness" over and over again.

I was not femme, but I was not butch. I was "gifted" but I was not a nerd. I was introverted, but I was a clown. I loved playing Atari and Hot Wheels, and watching "Scooby Doo," "The Muppet Show," and "The Facts of Life."

I worshiped Princess Leia from "Star Wars" because she carried a gun, and helped Han and Luke escape from Darth Vader. I rode my bike everywhere and was terrified of dolls. I read too much and did not care about clothes. My best friend was my dog - and she did not mind that I liked to wear baseball caps or had crushes on other girls.

Sometimes I wish my parents had taught me that a girl playing with Star Wars action figures was not shameful. Or, that liking other girls "that way" really did not make me different. It turns out that the desire to play with boys' toys at the androgynous age of 8 is completely normal - and so is being a lesbian.

What I would love most in the world, is for young LGBT kids to understand that there is no need for them to feel "other" now. Because those who try to make them feel different, are just generally uneducated and afraid.

I want them to realize that no matter people's gender or sexual orientation, there is no other. Because we are all fundamentally the same.

Love this site. Thank you for doing this.

Wow, I'm just a few years younger, but this may as well be my story... thanks for sharing :)