Alan, age 12
Halifax, Nova Scotia, Canada (1978)
My first memory of being "different" or gay happened when I was probably no more than 7 or 8 years old. I was taking swimming lessons at the local YMCA, and I remember a man walked into the pool area and sat down, waiting for our class to be over. He was very cute and had a very hairy chest. 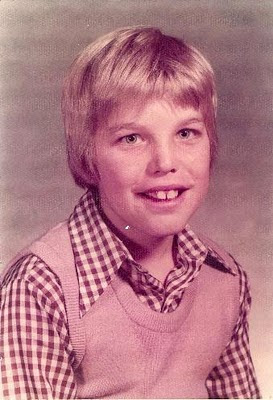 All I can remember was being mesmerized by him. I wanted to swim over there and rub my hand over his chest, as I had never seen anything like that before. To this day, over 35 years later, I can still picture him in my mind.

I grew up in a very strict Roman Catholic family. It wasn't until I went away for university that I was able to be true to myself. Many, many times I wanted to go to the student gay club, but I just couldn't muster up the courage to do it.

Finally, I met a lesbian, and we became very good friends. A few months later I told her I was gay too, and she was so happy.

It felt great to be able to true to myself. It wasn't always easy, but I am happiest knowing that I am true to myself, and I'm at peace.

I now live in Toronto, and was formerly the Treasurer of the Toronto Pride parade. I have met so many great people there; friends who I still have today, and friends I wouldn't have if I wasn't true to myself and made it through.

It took me a long to say "I am gay" out loud. There were a lot of tears, a lot of stress, and a lot of sleepless nights. But I wouldn't change my life.

Everyone's time to decide to be true to themselves, is their own to make. It may be in your teens, 20's, or even later. But only you know when it's the right time.

Your story reminds me so much of my brothers. It touched my heart.