Bryan, age 8
Bolivar, Ohio (1984)
Lawrence of Arabia?  Nope, it's me Bryan - in one of the costumes my grandma brought back from her travels. I wore this outfit so often, she once told me once she'd have to go back overseas to get another! In fact, it was rare for me not to be in costume: cowboy, air force, king, preacher, etc. One time, I dressed up my favorite action hero in a hoop dress, and I'd enter into another world. 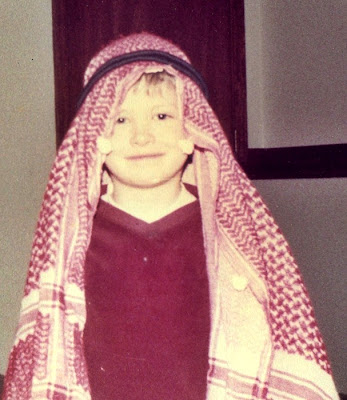 My mom, who had good intentions, often tried to "man me up" by throwing balls at me. I never could catch a baseball.

The musical "Annie" was the soundtrack to my early life. Indeed, at times I felt like an orphan.

I always knew I was different, but I didn't always know why.

One night as a young teen, my family was watching Donahue on TV. There was a gay couple on the show, and I innocently inquired as to what was happening.

My dad answered back to me: "If you ever want to try something like that, you should let me know." Why? He said he would, quote: "Take me out in back of the barn and put me out of my misery."

Years later, before my dad's passing in 2008, he was working as a security officer at a local hospital. He was on a suicide watch, and the man he protected was gay. I'm told that dad, a man of relatively few words, counseled him: "I know things seem bad now. I have a gay son. He went through the same rollercoaster ride. He just got married to his partner. Things will get better. I promise."

And they do!  Things do get better! I married my partner in 2008, and we adopted 3 dogs and a cat.  We're thinking about adopting human kids now, too.