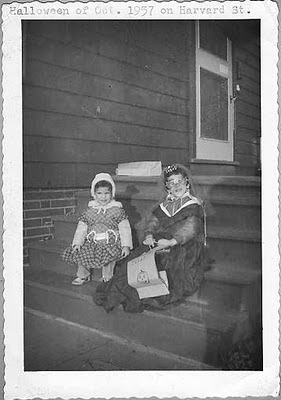 I don't remember this Halloween at all, and can't imagine why my mother would put me in my sister's dress like that. But it was some foreshadowing, for sure.

I think I knew I had feelings for men around age 8. I liked my male teachers much better than the women. Not having a father figure made me look elsewhere for that male companionship.

At 12, I felt much more mature than other guys my age. I had major crushes on all cute boys, and many of the pop culture icons of the day.

The only movie images of gay men in the late 60's and early 70's were either evil villains who had to be killed, or swishing effeminate guys who were jokes. So I hid out, deep in the closet. From around age 13 to 16, I knew for certain I was different, and dreaded being gay and outed.

I only dared to have sex very discreetly, while keeping up the image of an All-American, straight jock. It wasn't till college that I really explored gay life in NYC, which then meant horrid gay-theater encounters and other closeted men.

I moved to San Francisco in 1978, and that finally allowed me to re-invent myself as a gay man. Since then I've blossomed into the person I wanted to be.

Gay youth today have it infinitely better than my generation did.
And they should take every advantage of the groundwork we laid for them.