This photo was snapped during my 5th grade commencement ceremony. That snazzy jacket was my favorite, because it was reversible. The duality fascinated me. Navigating my way through the subsequent school years as a closeted gay boy taught me a lot about my own duality. 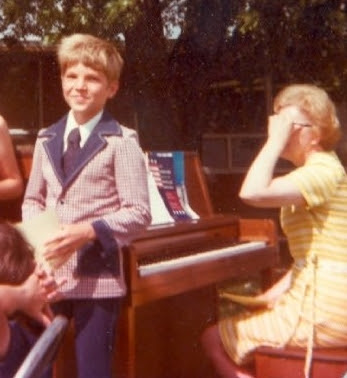 Growing up in Upstate NY, I didn't have any gay role models. Those who were perceived to be gay were mocked or whispered about behind closed doors.

I immersed myself in every school activity imaginable and cultivated a large group of friends.

If I befriended someone, they'd be less likely to tease me or acknowledge what I already knew:
That I was gay.

Looking back, I think I was subconsciously trying to protect myself.

In my younger years, I oscillated between boyish and not-so-boyish stuff. I was obsessed with Tonka trucks and fire engines, watched "Popeye" religiously, and loved climbing trees.

However, I was equally obsessed with my grandmother's white high heels,
"I Dream of Jeannie," "That Girl" and "Bewitched" on TV. I would often perform the theme song to each show when it aired.

One afternoon, at the age of 4, I was mortified when my cousin burst the door open to my grandparents' bedroom, and discovered me watching "Bewitched" - while sitting sidesaddle on a broom, wearing my grandmother's heels. I carefully placed a long towel over my head to simulate Elizabeth Montgomery's hair.

He laughed, asking "WHAT ARE YOU DOING?" I turned to him, sitting on my broom, and said, "I’m Bewitched." It was probably my first coming out moment.

After college, I packed my car and moved to Los Angeles. I officially came out at the age of 24. I made that decision on a Friday night, while dancing under the glittering disco ball at the Catch One nightclub.

To all of the gay kids who may be struggling today:

Someone once asked me: "If you could wave a magic wand and become straight, would you?" I instantly replied "No." Despite some difficulties, it's been a rich and rewarding and fun life so far. And it really does get better!

Having lived the same dreams and the same nightmares, David's story rings so true on all levels. I personally would have had it no other way and for him the same! What he brings to this world is something that makes it a better place to be. ANYONE would tell you that.


I have no fashion sense and have to take friends with me when I shop for clothes... I once chose to buy plaid pants with birthday money... So, maybe I'm not the best person for advise here!