Jeanie, age 8
Kentucky, 1989
I was always a tomboy. Climbing trees, strategically placing my GI Joes for battle, and playing war with the boys - always won out over makeup, tea parties and Barbies. I hated girly clothes and She Ra was my hero. When playing house, I wanted to be the dad, as I loved pretending I was in love with the girl playing the mom. I never thought I was different, despite my crush on Alicia Silverstone. 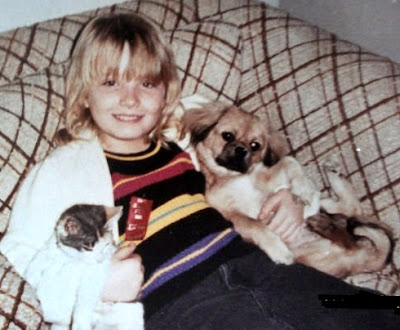 As a young teen, there was so much pressure to like boys. Heterosexuality was implied, and I was confused. I never considered that I was gay, so I acted boy crazy, and decorated my walls with posters of male celebrities.

While all the other girls swooned over Jared Leto in "My So Called Life," all
I could think about was Claire Danes. I wrote off the feelings I had for other girls as "admiration" and ignored feeling out of place.

I began dating my best guy friend and married him right out of high school.
We started a family, and I accepted that I was always going to feel out of place, and would never know why. Until recently, that is...

I've met an incredible woman and I've fallen for her. My epiphany finally came:
I knew I was gay. I came out to my husband first, followed by my best friend.
It's been a year since then, and I have come out to all my friends. Fortunately, only a few rejected me.

But I'm still not out to my family. I'm working up the courage to do that. It's a slow progression, trying to change my life completely, but I'm getting there. It's never too late to start living authentically. I'm doing that a little more each day.

My experiences as a child were vastly different from those who already knew they were gay. So I can't really relate to kids who face rejection and bullying.

All I can say is, be true to yourself.
There is nothing more satisfying than being who you are.

So your ex-husband knows and hasn't told your family? He sounds like a really nice guy.

Why haven't you told your family??

I always thought that what I felt for girls was "admiration" too! I tried hard to change who I am last year, but I failed. If I tried to lie a little bit more to myself, I think I would "fall in love" with my "brother" (that's the way I call my best friend). Well, thank God I started accepting who I am before it happened. It's never too late! Hope u have a wonderful and beautiful gay life.

I haven't told my parents either. It's pretty difficult, isn't it? I still live with them, so I think it's even worse. :S

Be happy and keep strong, girl!