At work the other day, while mopping the floor with one of those old stringy mops, I had a flashback to when I was about 8 years old. I was at my Grandmother's house, and I grabbed her mop from the garage. Leaning it up against a chair, I began playing "beauty parlor" by braiding and combing that nasty, dirty mop head. This, while my brothers were outside playing in the dirt. 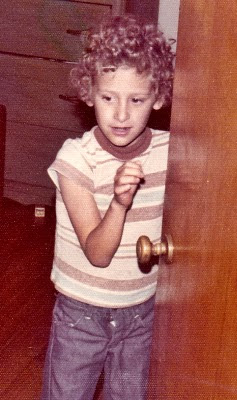 I knew I was different from a very young age. When I was about 5,
I remember asking my mom if she thought I had a good figure.
She told me, "Little boys don't worry about their figures."

Growing up in a small South Texas town in the 1970's, there were no gay role models. I didn’t even know what being gay was. Yet, people at school called me "f*ggot." How did they know
I was gay before I did?

Did they somehow see my eyes lingering on the guy in the 7-Up commercial that I loved so much?

Or did they know how happy I was when MTV would play Elton John's "I’m Still Standing" video?

I didn’t know I was attracted to men, I just thought I was jealous of them.
It was the only emotion I could link my feelings to.

Years later, I realized that people who call other people names, are only doing it because of ignorance. I now forgive them for that, as the bigger person.

I came out in college. Lucky for me, I have amazingly supportive parents. When I was trying to tell my mom I was gay, I couldn't get the words out through the tears. She finished my sentence for me and hugged me.

"It doesn’t matter to me one bit, sweetie," she said. "I'll tell Daddy, and at least I know I'll always have someone to go shopping with." I love my mom.

Honored that I got to be a part of this amazing blog!

We love you Bitchy! Great anecdote!

"I just thought I was jealous of them..." - that's brilliant!

Movies on my Mind said...

What great hair you have.

You are amazing, Bitchy! We love you and your hilarious blog in South Africa :)

*tear* I can feel your heart pouring out on this webpage. Thank you for sharing such a non-bitchy moment with us.

Wow! You still have the same hair! Love you D!

Congrats, all the best for the coming years!

<3 you Bitchy! Great story and what an awesome mom you have.

20 years?? That is wonderful!! Thank you so much for sharing your story with us :)

Thanks for sharing this! You have a great Mom! :) Congrats on 20 years!

Happy anniversary! (Somewhat belated, but I just stumbled across this.) Many happy returns!