Childhood was not a happy time, and it's shown in my face here. I was raised by a fundamentalist Christian preacher and his wife, in a home filled with abuse, where every emotion and desire was suppressed and beaten down. 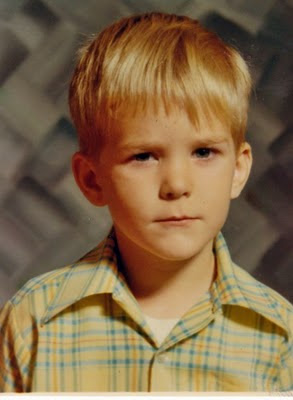 I was constantly bombarded with messages that gays and homosexuals were the blight of the Earth, and who were faulted for every problem and natural disaster.

I was shown mocking images of flamboyant gay men in drag and butch lesbians riding motorcycles, as clear evidence that men and women had turned from their natural affections.

I didn't really have indications that I was different, because I had no reference points for comparison.


But, I do recall being very young, and being very intrigued by the male nudes at the museum.

In high school, I met another boy with a similar upbringing and we became close. As we started sharing our deepest thoughts and intimate secrets, we revealed that we both enjoyed this forbidden pleasure. Of course, I never mentioned it to my parents. According to them, ALL sex was bad, and even remotely sexual thoughts would send a person straight to hell.

Even then, I didn't realize those desires as gay. To me, homosexuals were the flamboyant (and ridiculed) queens in the Pride Parades, wearing shorts and leather hats. Yet secretly, I thought they were the hottest men I had ever seen!

It wasn’t until I left home that I came to terms with who I was.

Once I got out of that bubble, I learned that gay men could share a life together, and there were places I would be accepted as I am. I also learned that love did not have to come with physical pain.

I also learned that my parents were not a positive influence in my life.
They continued to abuse me with their guilt, disappointment, and shame long after I became an adult.

Thus, I learned that I didn't have to keep my parents in my life, and we haven't spoken in years. I'm a much happier person for eliminating that negativity.

More importantly, I learned that my feelings were not a cause for shame, but rather a reason to celebrate. And, that I was allowed to actually have fun and do things that felt good and enjoyable.

The young boy in this pic was introverted, shy, withdrawn, abused, and hurting. The adult man that this child became is intensely happy, full of life and love and cannot wait for each new day!

What a wonderful and encouraging story.

Very sorry for the hurt your parents caused you. All people deserve to be loved for who they are. You deserved that affirmation! Glad you have managed to move beyond that!

What a wonderful if not scary story. I'm so glad you've put that past behind you and became the person you are today!

While not gay myself, your story otherwise matches my own, and I know how hard it is to break out of such a damaging religion. Much love to you. Thanks for sharing your story.

What an inspiration you are! I wish I could make that little boy smile, but BE YOU! Baby you were born this way!

Thanks for sharing your story, continue to thrive and be well!

I want to hug the little boy in that picture and protect him, it makes me want to cry seeing that little face. That said, it DID get better so hooray for that!

Your sad story once again certifies what I've always believed about so-called "Christians". They can talk the talk,, but seldom ever walk the walk. I'm sorry you had to endure them.

Cool story dude. Is it wrong for me to believe that gay people aren't born gay, that sexuality is not as cut and dry as all that?

@jlenoconel -- "Is it wrong for me to believe that gay people aren't born gay, that sexuality is not as cut and dry as all that?" -- You can believe anything you like, JL. But let me ask you this: If sexuality is not that cut and dry, then that means you can easily change yours, correct? Try changing it over the weekend, and let us know how it goes, ok? :)

you almost make me mourn, moving story, it's amazing how, despite this environment, you could leave the emotional oppression. I admire you

Hi guys. I am the kid in this picture. Thanks for all the kind words. Although it took a few years, I am truly a happy man now. Maybe my childhood helped me become the patient, tolerant person that I am today or maybe it just gave me the motivation to break away from a bad situation. However it worked out, I am a very happy and well centered man today with great people in my life (including a brother and my birth mother who did not raise me and I met when I was 23).

Family are those you chose and not those you are given.

My main message here was really to shout out "It get better!!" no matter how dark the clouds seem when you are hurting. Bullies can be parents, classmates or strangers, but hang in there because there is no better revenge than having a great, happy, fulfilled life as an adult.

IT REALLY DOES GET BETTER!!