Karin, age 4
Sacramento, California (1964)
My mom made me this Mary Poppins costume, and I loved it so much, I slept in it. Mary Poppins flirted with Bert, but I was always sure it wasn’t serious. Mary happily lived alone, refused to take directions from men, and as far as I'm concerned, she is more than my first crush - she's my blueprint for life. 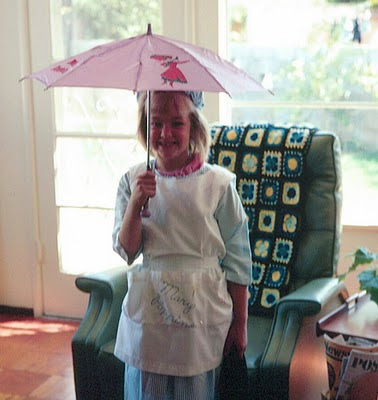 I thought Julie Andrews was quite wonderful, but Mary was the one I loved.

From early on, I knew I didn't want men ruling my life. But it wasn't until I was a teenager I realized it wasn’t about men at all - it was about women.

I've always liked love stories, and once wrote a story about a young girl who saves a troubled Queen from a terrible marriage. They run away together and live happily ever after. If my 5th-grade teacher thought that was strange, she didn't say so. Maybe because on the outside I looked so normal.

I liked Barbies and Mary Poppins and pretty clothes. I was as normal as normal could be, except for the not ever dating boys part. And while I was publicly very crushed out on Bobby Sherman's dreamy eyes, my heart, body and soul belonged to Batgirl. As Julie Gordon, she was a librarian; and as Batgirl she rode a purple motorcycle and fought in those great boots. Unlike Bobby Sherman, she gave me serious tingles.

This photo reminds me of that conviction that I could make the world the way I liked it. Just like Mary Poppins did, even if I couldn't sing or slide up a banister. And in that world I would be the kind of normal I was born to be.

Turns out my normal is being a lesbian, a girly-girl who likes girls, a mom,
a romantic, and a writer. But it doesn’t include being practically perfect in every way. Alas...

But the world is a better place because you were born this way. Lee

Your story reminds me a lot of my own!

There's a great book you make like called "A Problem Like Maria - Gender and Sexuality in the American Musical" by Stacy Wolf. For me, it made me realize that I'm not the only one who crushed on all these amazing, independent women, and there was a reason behind it. xo