This photo was taken behind my grandmother's townhouse in East Baltimore. Obviously, I saw women pose this way for photos, and just assumed I was supposed to do the same thing.  I don't think I had a sense of femininity yet, clearly from what I'm doing with my mouth! 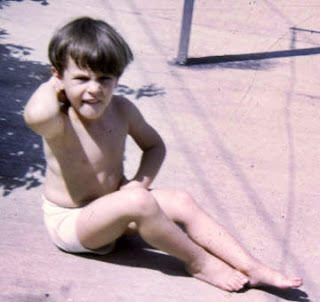 We were a big Sicilian family and my relatives lived across the street. When I was 3, we moved to rural Michigan and my life turned to hell.

But I always spent summers on that same block, and it was my world, my own Sesame Street.

An Uncle of mine died just before I was born, and he was all anyone spoke about.


He'd become a fairly famous songwriter, and I knew at 3 he was gay. Or rather, that he was like me, but I had no idea it had anything to do with sex.

I was aware of gay men whenever I saw them, because they were nothing like my uncles. They didn't have women telling them what to do, and they were fun to be around. And they'd ALL been to Europe, or said they had. That was all I wanted out of life, and I wrote an essay in 2nd grade about how I wanted to be "queer" when I grew up.

Queer was the only word I knew for it, and had no idea it would be a problem. But when I read the essay in class, my mom was called into school. If anything,
I thought gays were superior. But I also knew stupid people made fun of them.

Looking at this photo now reminds me that as a child, men seemed peripheral and irrelevant. They were always somewhere else, doing something that didn't seem to matter much.

TV was the same: Men worked in suits and were boring and tried to hold back. The women were clearly smarter and more clever in every way.

Thus, I identified with women (and later gay men) as being the road to my independence. Even today I am still uncomfortable in all-homogenous groups, especially all-gay or all-white.

Great piece, Enzo. You know I have moved back to the "sticks" of Michigan, but I can live anywhere after Hyde Street. Keep up the great work. Loved your show in SF.
Karl

You're writing is like a delicious comfort food. You made me feel right next to the little boy who grew up to be a fabulous man.

Wow - thanks for these comments - just seeing them now. Karl, did I meet you? I tried to meet most everyone who came to the show.