Frank, age 6
El Paso, TX (1990)
I grew up in a Christian home. My mother always gave us the best of the best,
at least to me, and she always worked hard to make sure we didn't lack anything. I'm the youngest of 7 kids, and there's 7 years between my next older sibling.
So that's probably why I was a bit spoiled. 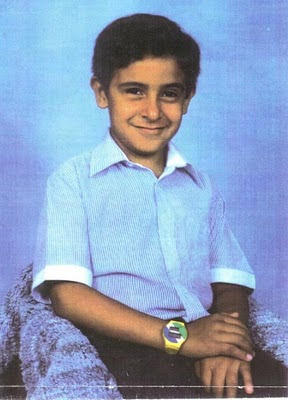 At age 8, I got involved with the Royal Rangers, the church version of the Boy Scouts.

It was there I realized that I was different, but my feelings were confirmed later that year at a summer camp.

One night I had my first encounter when I was kissed on the lips by my tent partner. He was a boy who, in my opinion, acted quite girly.

For years I prayed to be rid of the feelings I had, but my prayers were never answered. Therefore I viewed it as just being born this way.

A weekend visit to my mother's house from college was the time that I came out to her. Scared that she would react otherwise, she said, "I always knew you were different. But regardless, you'll always be my little boy." To hear that has given me great courage in life.

I was later in my first relationship, which was extremely abusive. But 4 years later and 1100 miles from home, I decided I didn't want to be beaten anymore.
So I ended the relationship.

Two years later, I found a wonderful guy who I'm now married to, and I couldn’t be happier. Funny to mention, but many people tell me that if I didn't tell them I was gay, they wouldn't have figured it out.

One thing that I would like to tell any young person out there:

Live for today, and don't worry about tomorrow.
When you start regretting your past, then that's when you stop living.