Erik, age 5
Burbank, IL (1988)
I was definitely born with style and a love for the camera. It almost seems innate that I knew how to do a couture pose at age 5. Go figure that I'd grow up being in the media, and a stylista. That's me: winning style contests and setting trends. 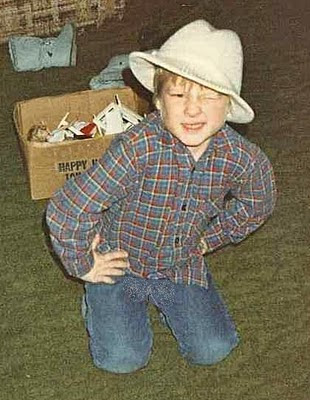 Early on, I placed women on a pedestal and seemed to align myself with them. I think the first time I realized I was "different" was in kindergarten.

The first time I knew I was attracted to men was in 5th grade, while holding one of my male classmates legs as he did sit-ups in gym class.


I sat fixated, watching his shirt crawl up his chest as he thrust up and down.
I did, however, have a crush on Alyssa Milano from “Who's the Boss." Although, from what I hear, most gay men my age did and still do. She’s fierce!

Pop culture always played a major role in my life then. I watched "Labyrinth" almost daily and idolized Wham and The Eurythmics. I didn’t care for the typical "boy" toys and would sneak into my sisters' room to play with their Barbies.

Being effeminate did cause me to get picked on sporadically. But I had a single mom and two older sisters who constantly instilled in me, that the only person I could be was me. God made me and He doesn't make mistakes.

With that knowledge, I was able to build a great collection of steadfast friends, and find my voice. Ever since, I've devoted my time and career to helping others find theirs; by lending an empathetic ear or through my dating/advice column, "Fire Down Below."

For those of you who may not have a great support system, or wonder if things will get better? Trust me: There's a whole cornucopia out there to explore.
And plenty of people ready to love and accept you for exactly who you are.

It's a pretty amazing journey. Honest.

weare very fans of you! congrats!

love it!!!
this style is super..=P
you´re great
xx

Watermark feels lucky to have your words and your contribution, Erik!