This is a picture of me and Skeezix, my first dog. 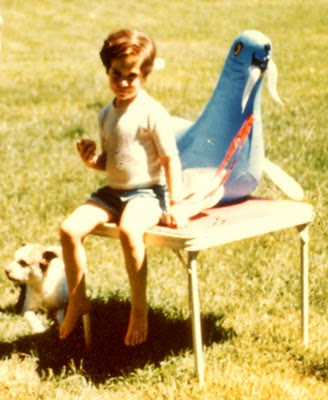 I don't remember having any celebrity crushes at any time. Joan of Arc isn't exactly a celebrity?

But I'd say I had some role models: JFK, James Dean, Superman, Huck Finn, Robinson Crusoe, and Maynard G. Krebs.

I wish we had Rachel Maddow back then.

I had an instinctive dislike for Chuck Connors. I'd beg to stay up late, just to catch his humiliating toss from the Fort. His sword broken, buttons torn off and spat on.


I was quite sure I was different by the time I was 7 or 8, when the "birds and bees" story circulated the playground.

My first reaction was to suggest to my "best friend" a position I replicated with my hands. I made a peace sign with both hands, and connected each hand between the two fingers, aka a scissor sister.

Later in life, I was lucky enough to come of age in the San Francisco area in the early 1970's. Now, I've found a role model called "Hothead Paisan" in a great comic book by Diane DiMassa. Wanna know what an angry dyke thinks like?

Thanks for this blog. I hope it gives some people faith to just be who they are.
And to fight for feminism. Remember, your gender is NOT determined by your sex.

Now go get out, and save the world.

Excellent point! I am a feminist and very involved with gender studies (also started college during the "politically correct" era -- like it or deplore it, PC worked to change the "traditional" language landscape). I have used gay and lesbian as if this were correct but wondered why the separation. I LOVE your explanation and going forward "gay" it is. thanks!