Paul, age 2
Fort Worth, TX (1969)
Here I am at age 2. I don't have a significant number of memories from this time, but don't I look great? The pink balloon and the Hollywood shades say it all. While I grew up in a city, my family had ties to ranching and farming, and I did not enjoy the "man's work" that was involved on the ranch that much. 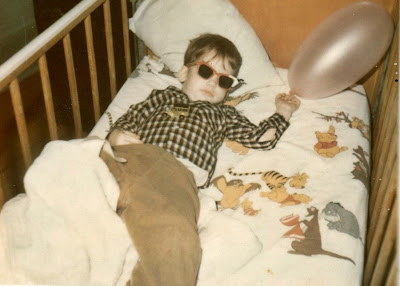 While I didn't mind shooting a gun and fishing, I did not enjoy digging post holes. My "moment of knowing" I was different was probably watching game shows with my mom. Paul Lynde ("Hollywood Squares") and Charles Nelson-Reilly ("Match Game") always made my mom and I laugh. It was sort of a secret we shared, because my dad and brother never really got that humor.

My first same-sex crush was probably Shaun Cassidy on "The Hardy Boys" TV show. And now that I think about it, I think I liked Parker Stevenson more. But Shaun had that album with "Da Doo Ron Ron," and I played it over and over, singing into a hairbrush the whole time.

As for a message to young kids now, whether gay or not, my advice would be:

Live your own life.

It's tough sometimes for everyone. Gay kids aren't the only ones with rough times. We're at a time in history of telling straight kids to understand how tough life is for gay kids - but like so much else in life, it's a two-way street.

Those straight kids may be going through some pretty rough times, too. While I'm not religious now, I like the the part of the prayer of St. Francis which says, "Seek first to understand, then to be understood". Another great quote is from a bumper sticker: "Prejudice rarely survives experience."

Gay kids: reach out to your straight classmates and help them through a tough time. I promise, they will be there for you when it's your turn.

PS: I'm really thankful for whoever took this picture, and that it survived!

Congrats on getting your blog and ideas on CNN! Great posts, I love them!

Finally, someone else that Shawn Cassidy's appeal!!!! Great post and wonderful advice!! Thank you so much for sharing!!

You seem like a really smart guy who's got it together on some level, and i really respect that, so if you wouldn't mind, I'd like some advice.

I'm practically the only pro-gay-but-not-gay kid in my high school who says something when some Neanderthal goes "That's so gay" but I still get dirty looks from the gay kid in my class, kinda like "don't you dare try to help me, I'd rather wallow in self-pity."

I like to think I'm really accepting of people, no matter what, but I live in a house with a white supremacist and homophobic mom and stepdad. I have really awful fights with them over their views and I'd just like to talk it out with someone, but I still get lectured by my one gay friend on how hard it is for him to be gay in his school (again with the wallowing) every time I bring it up. Even on this site sometimes, I feel like an outsider because I'm just not gay.

I'm all for gay pride, but honestly, it's like skin color to me, meaning you can't control it and it shouldn't define you. Should I just keep my mouth shut when it comes to this stuff, or should I find new friends, or... I don't even know. Any advice is greatly appreciated. Sorry for the runaway comment. Great story. :-D Ok, bye.