My sister and I got into Grandma's hats, and of course, I picked the pink fluffy one. It WAS the most stylish. A year later, I sent my mother clamoring for the Valium when she asked who I wanted to be for Halloween in 1st grade.

I replied, "Batgirl." I was Batman. The next year I said, "Wonder Woman."
I was Spider-Man. The NEXT year I said, "Isis." I was Batman - again. Then in 4th grade, I said, "C-3PO"  and she breathed a sigh of relief. That is, until I put on the costume and said in a lisping English accent, "Oh, R2!" Amazingly, my mother never took up drinking... 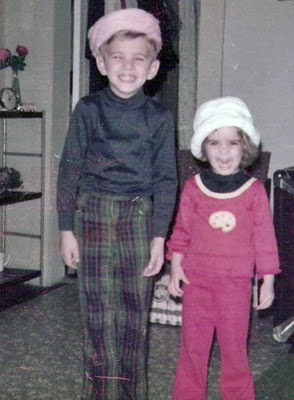 I saw "Return from Witch Mountain" in 1978 and had my first crush on Ike Eisenmann, who played Tony.

Then I realized my friends were developing crushes on famous women or female classmates.

And I thought, "When does that happen to me?" I'm still waiting.

Everything was fine in my life, until late Middle School and High School. That's when the tormenting began, and I cringe to this day thinking about it all.

But as SOON as I was out of high school, things got much better.

Without the constant grip of fear, my grades shot up to honors level, and I grew much more confident in myself. It was a few more years before I finally came out, but when I did, I felt even better.

My advice to all going through it now is:

I had such a little crush on Tony from Witch Mountain too! I would watch the scene where he's shirtless for like 3min over and over!