Scottie, age 8
Matthews, NC (1995)
So, I'll begin by stating that I was born female, and I still identify as one; Scottie is my legally given name. This photo was taken by a friend of my mother's who had taken my brother, sister (whose arm you see), and me out for lunch. I'm the youngest of 4 in our family. I chose this photo, because of what it represents:
a child's interpretation of misunderstood emotions, feelings, and desires. 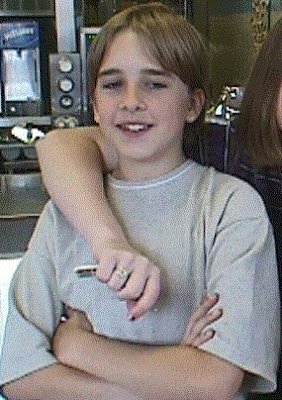 I remember being asked by my brother just before it was taken: "Why do you need to dress like a boy?" I became so flustered at being called out, not really understanding the situation, and why he'd ask me a question like that.

But I defiantly responded: "Because I am one!" Thus, the nervous childish smirk on my face, and trying to figure out why I was embarrassed.

Over the years, that important memory has stayed with me, mostly because I feel like it explains the beginning of my understanding of how and why
I felt so different.

I've realized that as a child, I believed it was acceptable for me to be attracted to women - and steal my older sister's fashion magazines to gawk at the models -
as long as I acted like a boy.

And I remained the tomboy well through middle school, struggling with my femininity throughout high school & college.

It's only over the past few years I've come to terms with being a femme lesbian. Which I must say, is much more comfortable than trying to hide behind the mask of a boy.

Hi Scottie, I loved the solution you've gave to your sexuality. Just as me. I'm a woman who love other women. No pity, no shame, no pain. Just simple as that.

Well said on all fronts. I remember thinking that maybe I wanted to be a boy when I was in grade school. It wasn't until later that I realized that I didn't want to be a boy, I wanted to do what boys did, which was hold hands with girls. Thanks for your story.

Your story is awesome and I'm so glad that you were finally able to find *you*.