Katy, age 1
Des Moines, IA (1957)
This photo shows me on my first birthday. My Great Aunt Dee was trying to indoctrinate me into the joys of being a girl. Even back then, I was dubious. 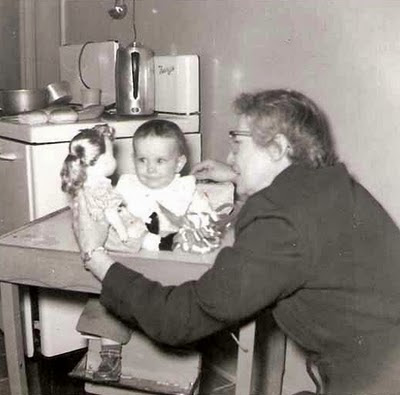 I knew I was different from others at a very early age. By the time I was 3, I was obsessed with gender. I would puzzle out who was a boy and who was a girl, and try to figure out where I fit in.

In the 1950's, gender roles were very clearly defined, and I didn't feel comfortable wearing dresses and doing girly things. But I didn't really want to be a boy, either. I figured there must be a 3rd gender that was half-boy and half-girl, and that's what I was.

I was always looking for others like me - and I found them. I was fascinated by a woman I once saw who smoked a pipe. She was one of us. I adored Mary Martin in the role of "Peter Pan." She was one of us, too.

But I found my true kindred spirit in a children's book my mother used to read to me. It was the character Christopher Robin in A.A. Milne's Winnie The Pooh series. In my 3-year old mind, he was the quintessential 3rd gender.

Plus he had two names: Christopher was a boy's name, and Robin was a girl's name. The illustrations showed him with long, curly hair and dressed in what looked to me like girl's clothes. He also wore Mary Jane shoes, just like the ones
I wore to Sunday school. And yet in the book, Christopher Robin was always referred to as "he."

Whenever my mother read one of the books to me, I'd ask:

"Is Christopher Robin a boy or a girl?"
"A boy," she'd respond
"Then why does he look like a girl?" I'd ask

I was hoping that this time she'd tell me he was both boy and girl.
But she never said that. She always had the same reply:

"Because he's from England."

It wasn't quite the answer I had wanted. But it at least gave me hope, that somewhere there was a place where I could find people that were like me.

K.T. Is there more? A great beginning to "your" story although it made me feel a little sad. I've heard that you're an accomplished writer of children's books, I believe? But I want to read more about you. Are you happy being who you are?

I have heard the Christopher Robin story before,a nd it never ceases to make me smile!

Glad you didn't take to dolls...except Emily, of course.