David, age 7
Dean, age 9
Sterling Heights, MI (1976)
Which two of these three brothers grew up to be gay? That's me David (left), with the hoop earrings. Even though it appears otherwise, my brother Dean (right) and I never knew the other was gay. Not until we were both adults who had moved out of the house. We weren't particularly close growing up, and are not as adults. So it was kind of a surprise to find out that we were both gay. 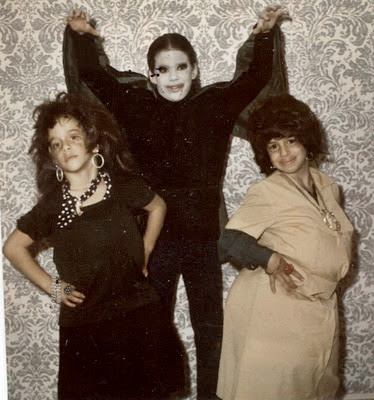 What I find most revealing about this pic is, despite the woman's clothes, there is already a consciousness on my part to "butch it up" for the camera.

By age 7,  I had already been told several times that I "write like a girl" and was asked on a few occasions whether I was "a boy or a girl".

These accusations and inquiries secretly bothered me.


It taught me early on that I needed to keep my feminine side in check. It's funny now that this thinking reveals itself, even dressed as a gypsy-girl for Halloween.

Ah, the innocence of youth.

Looking back, I definitely had same-sex attractions growing up, but I always rationalized them as "envy". I guess I certainly "envied" some hot looking guys.