Lindsay, age 3
Western, Kentucky (1985)
I think I always knew on some level that I was different – and understood that different was not good. I was a tomboy, and I spent much of my childhood with my cousin Russ, who is the same age as me. 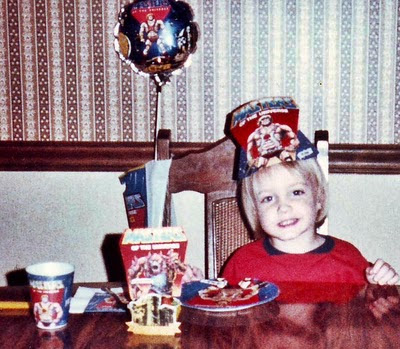 His older brother taught me new words like "f*g" and "queerbait." I have a very vivid memory of Russ calling me gay. We were about 6-years old at the time.
I asked him what it meant and he said, "It means you're a girl that likes girls."

I took a moment to process that in my little brain and concluded, "Yeah, you’re right." We went back to playing in the yard, and I buried that realization deep in my subconscious, to be painfully hashed out later.

At 6-years old, we don't yet have all of the ugly social messages we receive later in life. Messages that make us feel bad about ourselves. Even when I had my first crush on a girl in the 3rd grade, I didn't really know what it meant to be a lesbian. I did know, however, that I shouldn't talk about it with grown-ups.

By age 8, I knew people would think it was weird and wrong. I knew that I really liked Jo on "The Facts of Life" and was fascinated by the character Lady Jaye on "GI Joe." Even though I didn’t understand yet why I liked them so much, I was still embarrassed by those feelings.

Now when I reflect on my childhood, I can see the progression from carefree tomboy fighting on the playground, to awkward pre-teen who invented crushes on boys, to angry teen running away from feelings that I tried to pray away.

When I finally came out to my mom at age 21, she hugged me, told me she loved me, and said, "This is something I've been concerned about since you were 2."

I guess that's why she didn't argue too much when I asked for a He-Man themed 3rd birthday party, as seen in my picture.

I hope when queer kids growing up today see people like me, who are now out and proud - and a Mom! - they know that being gay AND happy is possible.

Lindsay, you're a beautiful person and this queerbait loves you. :)

Beautiful! I have been called names before, and they are nothing but ignorance and someone trying to hurt me. It used to hurt me before, then I realized, I am the one allowing hurt to get in me. Now I can care less to insults. Great story honey! I am glad I read it!

The little bit about you being a mom brought me to tears.
I'm 17 years old and I'm finally starting to acknowledge the repressed feelings I've had all my life. But I've been having so much difficulty with it because I despretely want children when I'm older. I'm so worried about raising a child who has same-sex parents because of the way society reacts to homosexuality. I live in Canada, so I get the impression I have it better here than in the States, but it still isn't completely accepted.
I don't really know why I'm writing this. Maybe just to thank you for that little bit of hope in a really difficult time in my life. So, thanks <3

poet - So glad I could give some encouragement with my story. That's exactly why I shared!

For me 17 was about the time that I realized I wasn't going to be able to ignore my feelings for other women anymore too. It was a really tough time to get through and I struggled for 3 or 4 more years before I just gave up fighting against myself. That wasn't very long ago, but even then, there weren't as many people out publicly and not as much talk about being proud. By the time you have children, the world will be a different place. Right now, all of our straight friends with children say how glad they are that their kids will grow up seeing how beautiful and normal our family is. :) Hang in there! - Lindsay

We're about the same age, I guess, as all of the references you gave--Jo from Facts of Life and Lady Jaye were my fascinations early too. I also had a crush on a girl in the third grade (as well as on my babysitter when I was 6-8) and for awhile I was very worried that I was lesbian because I didn't know really what that meant. Strangely enough, past a couple of bicurious moments(college, dontchaknow), I ended up mostly straight in adulthood. I guess it's just interesting to me that our stories started out so very similar and yet ended somewhat differently. At any rate, I think you were an adorable kid!