I remember my mom dressing me up in these fabulous late '60s/early '70s outfits that were really only appropriate for an adult appearing in a production of "The Boys In The Band." But I loved being fashionable! Especially as I got a little older and became a full-fledged teenager. 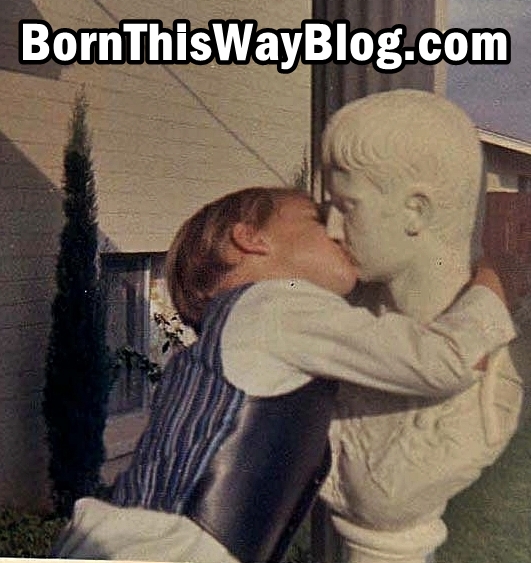 If I had to choose one movie that completely changed my life, it would have to be "Carrie," which came out in the summer of 1976 when I was (drum roll please...) a tender 13 years old. Okay, I'll wait while you do the math. Yes, that's right --
I am older than dirt, people.

Unless you've been living under a rock (or inside a bottle of Absolut), you must have heard about the recent rash of young people who have committed suicide due to severe "bullying." I hate that word. To me, that's like referring to rape as "severe flirting." These boys were tormented and tortured. Now, whether they were actually gay or not really doesn’t matter. The mere fact that they were perceived as gay, and therefore "less-than," does.

And if this can happen in 2011 - after "Will & Grace" and Ellen and Rosie and Elton and The Scissor Sisters and "RuPaul’s Drag Race" and Adam Lambert and Jane Lynch and Neil Patrick Harris and "Glee" and "Ugly Betty" and "Modern Family" - and all the mainstreaming of homosexuality? We're in big trouble.

But back to "Carrie" - It was a low-budget summer horror movie for teens, and it's an emotional rollercoaster that featured valleys of sadness and peaks of triumph. The movie is scary and touching and funny and sexy and campy and stunning. But ultimately, sad. If I had to summarize "Carrie" and why I love it so much, in just one sentence it would have to be -- "Don't pick on the freak."

You see, Carrie White has powers that no one knows about -- amazing powers that she has had to control and hide her entire life. Sound familiar? When she's pushed too far, she uses those powers to exact revenge on her tormenters.

It's strange, but high school is the only place where the most boring, middle-of-the-road, lowest common denominator idiots rule the kingdom. Five minutes after graduation, the real people - the so-called "freaks" - take over, while Ken & Barbie go to work in a bank or sell insurance and start having babies and do exactly what is expected of them, which is very little.

The "freaks" beautify the world, make people dance and, most importantly, make people laugh. I would rather die from a flesh-eating virus than attend one of my high school reunions.

Why the hell would I want to catch up with a bunch of boring people I never liked - who are on their third marriages and will probably try to sell me AmWay? They don't deserve me at their reunion. I wouldn't change places with the vapid prom queen or the brain-dead star quarterback for anything. Why the hell would you want to be Kate Gossellin when you can be Cate Blanchett? Screw ‘em all.

High school is like a box of rocks. It’s so easy to get through it when you’re just some plain brownish gray pebble lost among all the others. But imagine a BIG rock in there -- like ten times the size of all the others. Or an iridescent opal with its ethereal rainbow always twinkling. Or a diamond.

Any parent or teacher who is not telling young people who are gay -- or bisexual or transgendered or "special" in any way -- to shine like the gems they are, has blood on their hands.

You are the adults – and you need to love your children more than some archaic book of outdated rules that was written thousands of years ago by a bunch of MEN -- not by God -- in an attempt to control the unwashed masses.

Religion is notoriously anti-Nature and being gay is Natural. And the inability to accept the fundamental biological reality of gay people is the ultimate ignorance and arrogance. AND, ironically enough, it is also the ultimate insult to "God!" Anytime you judge me, or any gay person -- or any one at all for that matter -- you are spitting in God's face.

Creative, sensitive, young people who are killing themselves is the saddest thing imaginable because of all that lost potential. It's a wasted life.

And you know what? So is the life that is lived following a set of arbitrary rules, sitting in judgment and making people feel less-than, as defective, or like they don’t have a future. All in the name of an invisible man in the sky.

So to the "freaks" who are struggling right now, I say this:
Just hold on, because your day is coming.

High school is not real. These people will mean less than nothing to you before you know it. And if you're one of the tormenters -- or an authority figure who feigns ignorance and looks the other way -- may God have mercy on your soul.

I hope that at least one part of that aforementioned famous book of rules is real.
Because, in my opinion, there is a very special place in Hell for you.

You really embraced the future! Is this bust still in your closet???

i love this picture-it is really beautiful and quite touching too!

This may be the best picture ever.

And mm-mm didn't that Robert Conrad have it all. Yessir!

OMG this pic is SO cute!

It's actually Augustus, not Caesar, I think, but it's so cute I can't stop smiling ;-)

Umm, wouldn't that be Caesar Augustus? SO, the exact same thing?

Well, it further proves, a hard man is good to find.
You look like acting should have been your career - you reeaalllly went for it.

caesar and caesar augustus aren't the same thing because after julius caesar, a bunch of emperors decided to play up their connection to caesar because plebeians loved him. after a while it just became an honorific for emperors. so referring to anyone but julius caesar as just "caesar" is too imprecise.

it's probably based on the augustus of prima porta - everything but the breastplate relief is very slightly different. it is sold through various online vendors as "bust of julius caesar", unfortunately.

Acting IS my career... And thanks for all the clarification on any and all Caesars!

LOL I love this picuture. Your hunky Physical Education teacher....It could´t be other way....

I hope you've blown this picture up poster-size and put it on your wall, because it is just so excellent.

I just went through all the pages looking for the story behind the pic. I love it!

I read every essay and this is the most thoughtful, feisty, and convincing writing of all. I am the parent of 2 gay sons and love every twinkle those "gems" have radiated since they were born that way.