This is me in Gatliburg on vacation with my Godfather. I am wearing my Farrah Fawcett-Majors "Logan's Run" t-shirt which I wore out by years end. I was obsessed with Charlie's Angels and begged my grandmother, who raised me after the death of my mother, to buy me the Farrah bust with real hair to style. I finally won out when I used my chalkboard to draw a portrait of Mrs. Fawcett-Majors to show my devotion was true. 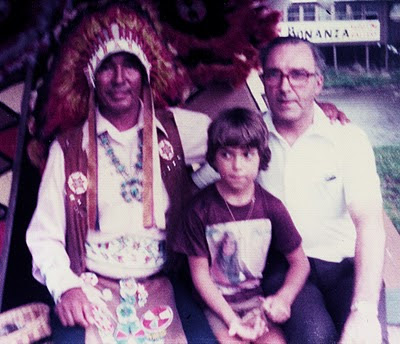 I grew up to become a hairstylist. A sidenote to the pic is that my Godfather never married, and when his parents (who he lived with) passed away he "came out" - and shut out the rest of the family before they had a chance to ridicule him. I never got a chance to tell him I was gay too.

I realized I was different from other kids when a magic show came to the school and the magician asked for a volunteer from the audience. I was so happy when he selected me, but then I was horrified when he said I was such a 'pretty little girl'. I informed him I was a boy, and he made a big deal out of it and embarrassed me in front of the whole school. I was probably in 2nd grade at the time.