Ed, age 2
Peoria, IL (1962)
This photo was taken when I was just shy of 2, and shows a happy boy who just won't stop being happy. That's why I like this photo so much – it shows my spirit that won’t quit. The plaid jumper is pretty hot, too! 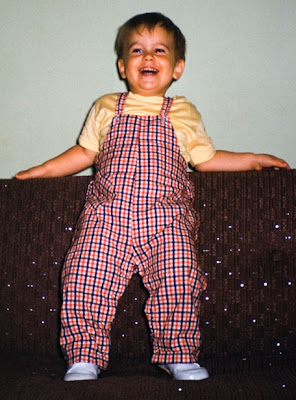 One of the challenges for me growing up was asserting my individuality. My parents were (and still are, to an extent) more concerned about how things look, rather than being authentic.

One of my earliest memories was in 2nd grade; I wanted to play the flute and quickly found out that boys don't play the flute. I learned to be quiet and just do what I was told.

But I always knew my inner feelings were somehow different than what was expected.


The first time I remember these feelings as being gay was when I was 11.
I wanted to be with my best friend at the time. There was something about being around him that just felt really good. I also remember how devastated I was when he moved away that summer. I missed him so much I cried, but knew that I couldn't tell anyone why I was crying.

That's also when I also remember being really attracted to Peter on "The Brady Bunch." Greg was too old and Bobby was too young - but Peter was just right!

After a long drawn out process, I finally came out to myself in college and realized I needed to be far away from home to really be my true self. Coming out to my family was incredibly painful; my father said he wouldn’t drink out of the same glass as me because I'm gay (this was the early 80’s). He’s mellowed a bit since, but we aren’t that close. I wish we were closer.

Somehow, I've kept seeing that happy kid inside myself, and that kept me going. And my life now is wonderful!  I'm in a 20+ year relationship, and I started my own business because I realized my true calling is to make my own box, rather than be in someone else's!

Be your authentic self.

Sad story with a happy ending! Continue to be true to yourself and you will always be happy.