Liz, age 6
Buffalo, NY (1961)
I was always a tomboy. My mother had to bribe me to wear a dress, and I insisted on no puffed sleeves or ruffles of any kind. Most of the time, I was dressed as a cowboy or in some kind of uniform and always carrying a toy gun. When space travel became the next new thing, I became obsessed with all things NASA and wanted to be an astronaut. I would lie upside down in our living room chairs and pretend I was orbiting Earth in my own rocket. 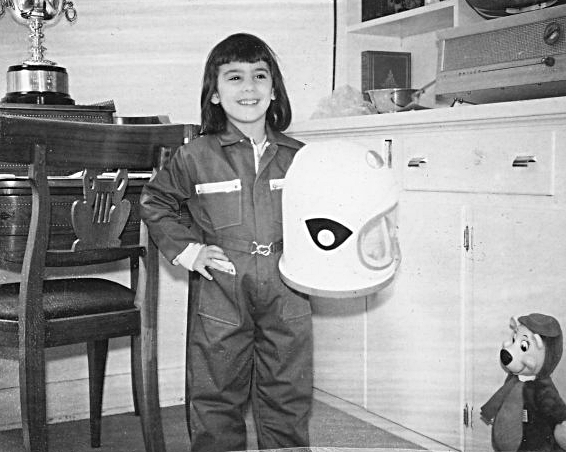 I think I always knew I was “different,” but never really understood what that meant. When I was 7 or 8, I developed a huge crush on my very butch gym teacher (didn’t we all?), but my mother told me crushes on other girls were perfectly normal. I spent a lot of time being “perfectly normal” during six years at summer camp, with many crushes on older campers and cute, butch counselors.

It never occurred to me that I was doing anything wrong, and none of my crushes ever materialized into anything more than long, flowery letters over the winter professing undying friendship. That’s what girls did, right?

I was also lucky enough to go to all-girls’ schools from age 9 – 17, so my perfectly normal crushes intensified, but I dated boys throughout high school and college, because that’s what you did. It wasn’t until my senior year in college that I finally came to terms with my gayness. My crushes had become more intense, and I knew I wanted more from another woman than long, flowery letters. It was a relief to finally embrace my queer self.

I came out in 1978 amid newly formed gay rights groups and a radicalized political climate that would get the ball rolling for many of the changes we’re seeing today. Back then, I couldn’t imagine marriage rights, laws protecting GLBT jobs and housing, and out GLBT political candidates. In the late ‘70s and early ‘80s, I marched in Gay Pride parades where half of my friends had to wear bags on their heads, to protect their identities.

Equal rights have come a long way...
But the road to complete equality is still a good distance away.
Posted by DJ Paul V. at 11:48 AM

Love the picture. At least your parents indulged you with the outfits. I LOVED to play with trains and cars and begged my parents to buy a Hot Wheels car for me. They never did, I guess hoping they could discourage me from my natural path - lesbian. In some way, maybe your parents knew and buying you those "boy" things was early acceptance.
Gay J.

And fabulous Miss Liz has grown up to be an extraordinary writer and person. Way to go, Liz!

Thanks for all the feedback!