Paul, age 12
Royal Oak, MI (1963)
When I was around 4 or 5, I announced to my parents that I wanted to be a ballerina. Not realizing that they would be crushing my dream, they explained that I could only be a "male dancer". That was my first clue that if I wanted to survive, I had to hide my true identity. 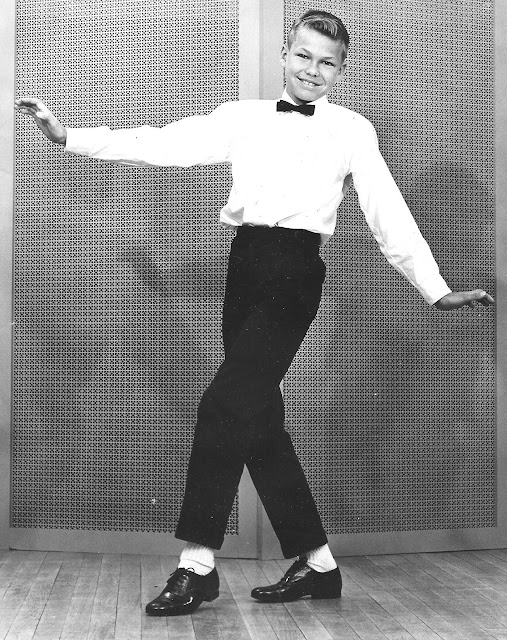 A few years later after when offered dance lessons, I of course asked for Ballet, but was told no classes were available for boys. The nearest dance studio offered a Boys Jazz & Baton class however. Baton! My 2nd secret ambition was to be a drum major/cheerleader, so this class gave me a free license to TWIRL.

My dad would take me to the studio every Saturday morning. Back then, I never understood why he -  and not my mom - came with me. I took dance until sometime during my first year of Junior High when the threat of being harassed - and worse - became too real.

Since I was already getting great practice running from dangerous situations, I joined the track team. The hunky 20-something ex-Marine coach (who I had a major crush on) also had something to do with my becoming an athlete.

For years I would feel a bit uncomfortable by this picture. All those negative memories would rush back. The fear of being "outed" because I was taking dance lessons, and my embarrassment that my dad was taking me to class because he felt sorry for me. At least that's what I thought.

I found out only after he died in 2001, that the reason he took me to class was because he loved to dance, and he'd wanted to take dance lessons himself when he was a boy. This still brings tears to my eyes when I think of the missed opportunity to be close to him, at an age when I desperately needed him.

And here's an FIY on my first kiss:
Age - 5 or 6
Place - behind the neighbor's bushes
The boy - Dickie Foster
My reaction - 'Why does it taste salty?'
Paul's first, famous-person same sex crushes:Tony Dow (Wally on "Leave It To Beaver")
Sal Mineo, John Gavin, & Rock Hudson
Posted by DJ Paul V. at 11:40 AM

This brought a tear to my eye. So touching. Thanks for sharing.

OMG!!!! YOU kissed "Big-Head" Dickie Foster??? I wonder what ever became of him...Love this photo Paul...this is taken just at the time I hit puberty and became entranced by BOYS, and foolishly let got of OUR friendship, which I regret to this day. I'm so glad we reconnected on facebook!! Your life interests me tremendously.

Your story is the only one that made me cry. To know that you and your dad could have shared the love of dance together and become closer, was so touching.

Thank you fr sharing this.

A very touching, and beautiful recollection, Paul- Thanks for enriching us with it.

I cried reading your story. Thanks so much for sharing this. I also dreamed of being a male ballerina, and I did take ballet for several years, but quit once the bullying got too much for me to handle. This brought back a ton of memories for me.

Yours is the first story which has prompted me to comment. I love that your Dad took you to dance lessons because of his unfulfilled dreams. I love it but it also bring a lump to the throat, in that it was an unfulfilled dream of his.
I bet he sure was proud of you.

Beautiful story! It brought a tear to my eye, too. There is a Heaven and I'm sure Dad can see how much dancing meant to you then and now.