Robbie, age 4
Arizona (1987)
I was obsessed with the 1985 movie version of "A Chorus Line". And according to my mom, I used to watch this movie everyday (which must've been really great to see a little Mexican 4-year old singing along to the song "Tits & Ass"). 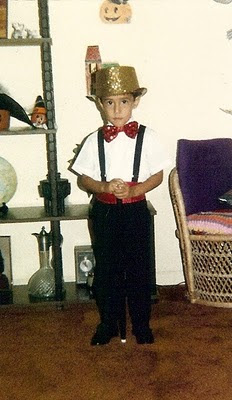 So when Halloween came around, I chose my own costume - a Chorus Line dancer. I can only imagine what my dad's reaction was, but my mom was supportive and obviously helped me with the costume.

The suspenders, the bow tie, the glitter and gold - all early signs of my future fashion sense, and attention to every sparkly detail.

For years, I was ashamed of these photos and the fact that I even dressed like this as a kid.
I repressed all of it and struggled with my identity in my teens.

I would always scrunch my face and turn away in disgust anytime my mom or family would bring up this costume,
or my love for Barbies, or watching "Steel Magnolias".

I never showed anyone these pictures and acted like they never existed.

Eventually I became more comfortable with myself, and settled into my own body and identity as a queer individual. Now I have no problems showing off these photos to friends, and they soon became like a gay badge of honor.

When I was a kid, I wanted to be a dancer. But the older I got, the more I became aware of how "different" I was from all the other boys. Such as only playing with the girls, jump-roping, and my Lisa Frank collection, etc.

I learned to repress any trace of femininity that I possessed, to avoid being teased or bullied for "acting like a girl". I regret this and wish I'd continued being myself, and pursued those dreams to dance. But as a kid, it's easy succumbing to societal and cultural pressures (especially in the Mexican community).

To "act like a boy" dominated me as I searched for group acceptance, and it wasn't until my 20's that I really came into "myself".

To paraphrase a scene from "A Chorus Line":'
'What made you start dancing? Who knows?
I'm Mexican. We jump around a lot.'

Hi Robbie,
I deleted your comments/story addendum, because the comments section is not the place to post up what should be sent as a regular submission. I saved all your text if you want it, but - everybody gets their moment to tell their story on their official submission page. Which you did :)